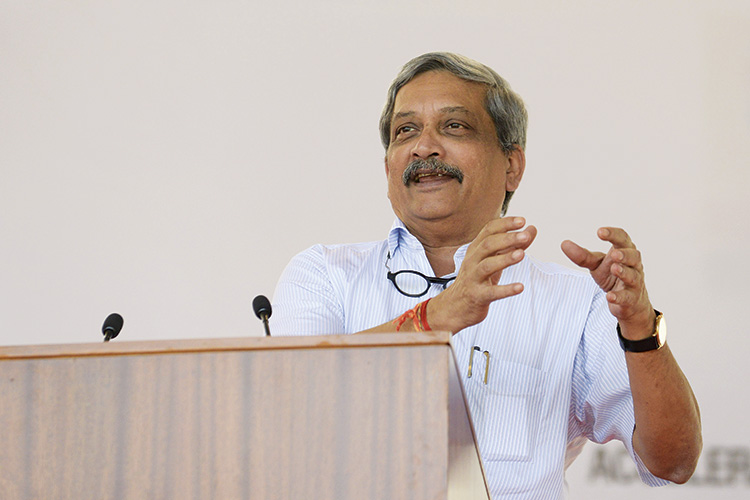 Goa Chief Minister Manohar Parrikar passed away at his private residence here on Sunday evening after a prolonged battle with pancreatic cancer. He was 63.

The condition of Parrikar, diagnosed with advanced pancreatic cancer in February last year and in and out of hospitals in Goa, Mumbai, Delhi and New York since then, had turned “extremely critical” on Sunday, the Chief Minister’s Office tweeted earlier in the day.

“Extremely sorry to hear of the passing of Shri Manohar Parrikar, Chief Minister of Goa, after an illness borne with fortitude and dignity. An epitome of integrity and dedication in public life, his service to the people of Goa and of India will not be forgotten,” he said in a tweet. Other leaders, cutting across party lines, mourned his death.

“Shri Manohar Parrikar is no more. A sincere, honest & sensitive political activist. Was simple and down to earth, I learnt a lot from Shri.Parrikar. As Raksha Mantri his contribution to making the armed forces a modernised, lean & mean fighting machine will remain unparalleled, tweeted Defence Minister Nirmala Sithraman.

“Extremely saddened by the untimely demise of my good friend Manohar Parrikar ji. An epitome of impeccable integrity, a down to earth personality, the first IITian to become CM of a state, great son of India gone too soon... RIP my dear friend...,” Union Minister Suresh Prabhu said in a tweet.

“I am deeply saddened by the news of the passing of Goa CM, Shri Manohar Parrikar Ji, who bravely battled a debilitating illness for over a year. Respected and admired across party lines, he was one of Goa’s favourite sons. My condolences to his family in this time of grief,” tweeted Congress President Rahul Gandhi.

Congress General Secretary Priyanka Gandhi tweeted, “My condolences to the bereaved family of Shri. Manohar Parrikar. I met him only once, when he graciously visited my mother at the hospital two years ago. May his soul rest in peace.”

The first Bharatiya Janata Party leader to be Goa Chief Minister, Parrikar headed the state from 2000-05 and 2012-14, before joining the Narendra Modi government as Defence Minister from 2014.

The country’s first Indian Institute of Technology alumnus to serve as Chief Minister of a state, he assumed the mantle on four occasions from 2000, but could not complete a single full term in office.

He returned to state politics in 2017 to lead a coalition government headed by the BJP and continued in office despite his protracted illness and amid criticism from the Opposition and civil society, which had repeatedly demanded his resignation on health grounds.

A widower, Parrikar is survived by his two sons, Utpal and Abhijat, their wives and a grandson.

In recent years, after several unpopular, controversial decisions, questions were being asked whether Parrikar, who won overall adulation for nearly two decades for his wit, bluster, charm and audacity, was really a salt-and-pepper-haired political rockstar or just a closet groupie clinging to the coat-tails of the casino, mining and real estate industry.

The shock is also rooted in the belief that the trained metallurgist was simply too omnipresent and omnipotent to melt away, just like that. The very fact that he continued in office for a year after he was diagnosed with cancer and occasionally attended office as well as public functions with medical paraphernelia trapped to his person, testified his penchant for not giving up and appearing infallible in the small, but closely followed cosmos of Goan politics.

While Parrikar was undeniably the weave, which determined the quality of Goa’s political fabric for nearly 30 years, there was very little about Parrikar’s public persona which wasn’t a paradox.

He appeared sloppy, but was meticulous in political strategy. He promised much, but actually delivered very little. As Defence Minister, he was obsessed with Goa politics. In 2012, he promised to retire and never contest elections again, but ended up clinging to power from a hospital bed until his end.

He swore to end casinos, illegal mining when in opposition, but failed to crack down on them when in power.

But paradoxes apart, the young boy born in a nondescript town called Mapusa, to a Gaud Saraswat Brahmin family of grocers in Portuguese-held Goa, rose to be India’s Defence Minister and was partly credited with carrying out cross-border surgical strikes along the country’s eastern and western borders.