Back Brexit deal or face long delay: May - GulfToday

Back Brexit deal or face long delay: May 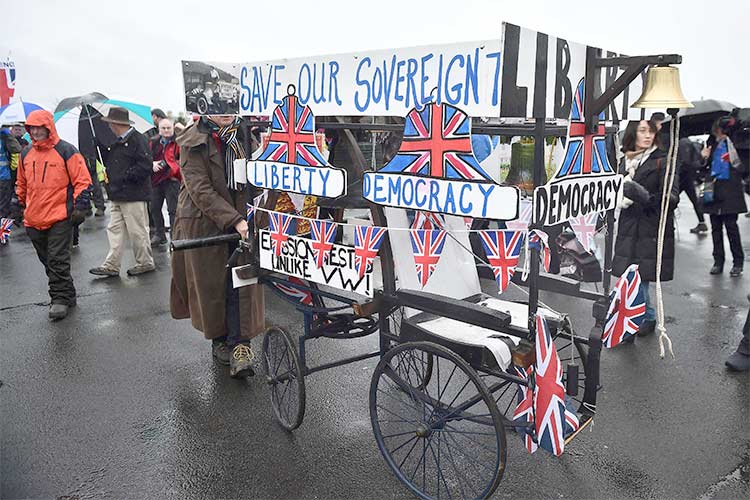 Pro-Brexit campaigners prepare to start the first leg of the March To Leave march in Sunderland on Sunday. Agence France-Presse

LONDON: Prime Minister Theresa May’s warned lawmakers that unless they approved her Brexit divorce deal after two crushing defeats, Britain’s exit from the European Union (EU) could face a long delay and could involve taking part in European parliament elections.

May issued Brexit supporters an ultimatum: ratify her deal by a European Council summit on March 21 or face a delay to Brexit way beyond June 30 that would open up the possibility that the divorce could be ultimately thwarted.

The prime minister bluntly warned that Britain will be forced to take part in European parliamentary elections expected to place at the end of May if there is a longer extension to Brexit talks.

“If the proposal were to go back to square one and negotiate a new deal, that would mean a much longer extension - almost certainly requiring the United Kingdom to participate in the European Parliament elections in May,” she said in an article in the Sunday Telegraph.

“The idea of the British people going to the polls to elect MEPs three years after voting to leave the EU hardly bears thinking about. There could be no more potent symbol of parliament’s collective political failure.”

The Sunday Times said May will warn Brexit supporters that unless they support her deal they will face a “Hotel California Brexit” where you can check out, but never leave.

To get it through parliament, the prime minister must win over dozens of Brexit-supporting rebels in her own Conservative Party and the Northern Irish Democratic Unionist Party (DUP) which props up her minority government.

“I know that I will have to do more to convince others, as well as the DUP, if I am to succeed in finally securing a majority for the deal,” May said.

The DUP said on Saturday it is continuing to hold talks with the government but differences remained over the Irish border.

Meanwhile, Latvian Foreign Minister Edgars Rinkevics said he would encourage his government to agree to a Brexit extension ahead of a EU summit this week.

“My own government is going to discuss this issue next Tuesday, in preparation for a Thursday and Friday European Council. What is important of course is that there is clarity by Thursday from the UK government,” he told Sky News.