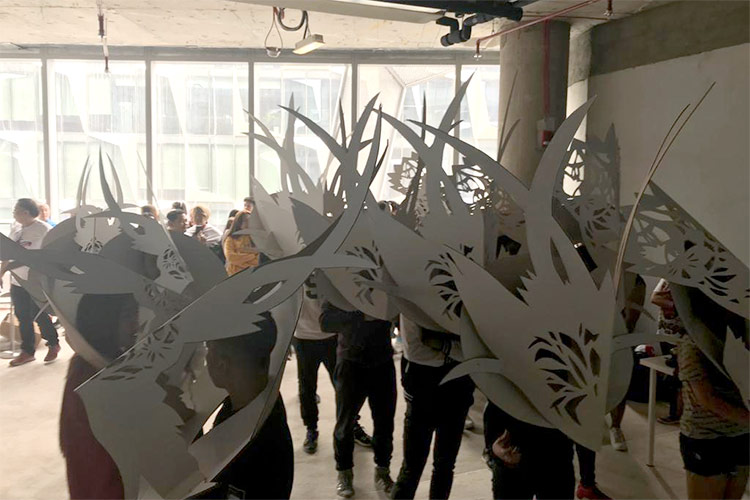 120 Filipinos in the UAE are practising with Trinidad and Tobago artist Marlon Griffith for the landmark parade.

DUBAI:  Artists and art connoisseurs from all over the world and in the UAE for the March 20 to 23 “Art Dubai 2019” will have the chance of viewing the first-ever light-and-shadow parade whereby Arab poetry and the Filipino ingenuity as a musician and designer will be welded with how Trinidad and Tobago people breathe their carnivals.

At the helm of the parade titled “A Walk in the Night” is Trinidad and Tobago-born and Japan-based Marlon Griffith who has established his name in creating public art through his light-and-shadow processions in other parts of the world such as in Jamaica, Bahamas and West Africa.

From the recent press conference at the Philippine Consulate General in Dubai (PCGDXB), Art Dubai artistic director Pablo del Val said the idea of hemming the three cultures together is intrinsic to the mission and goal of the 12-year-old global visual art platform which is about bringing together visual artists from all parts of the globe and take their individualism to others.

Del Val said the inclusion of the light-and-shadow parade is in tune with the “innovation programme” of the host city of Dubai and the entire UAE. He underscored that innovation is very much the character of each and every artist who normally endeavours to get into something novel to build on something new.

“Who else to collaborate this carnival-themed project with, but with the vibrant Filipino community in the UAE,” said Del Val who is from Spain.

“We have similar backgrounds,” he added.

The Philippines was a Spanish colony for three centuries from 1571.

Griffith described the merging of cultures as a “poetic project.”

It is the interpretation of Arab poetry through the plight of birds from all over the world travelling together through valleys and doom but in the end are victorious.

In focus is the colourful Philippine mythical bird, Sarimanok from the Maranao Muslim tribe in Central Mindanao which augurs good fortune. Legend dictates the Sari (garment) manok (chicken) was the huge colourful rooster which Prophet Mohammed (PBUH) found in the first of the seven heavens. Judgement Day comes when the Sarimanok stops crowing.