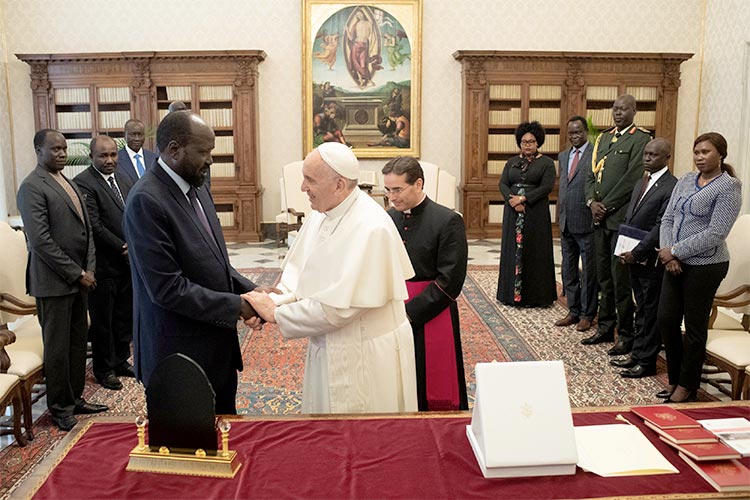 Pope Francis attends an audience with the President of South Sudan Salva Kiir at the Vatican on Saturday. Reuters

VATICAN CITY: Pope Francis has asked aides to resume plans for a visit to South Sudan, a trip that had to be scrapped in 2017 because of the civil war in the world’s youngest country.

During a meeting with South Sudanese President Salva Kiir on Saturday, Francis “expressed the wish to ascertain the conditions for a possible visit to South Sudan,” a Vatican statement said.

It added that he wanted to make the trip as “a sign of closeness to the population and of encouragement for the peace process”.

Oil-producing South Sudan, which became independent in 2011, descended into civil war in December 2013 when a dispute between Kiir and his sacked deputy Riek Machar sparked fighting, often along ethnic lines.

In September, Kiir, who is Catholic, and Machar, a Presbyterian, signed a peace deal calling on the two main rival factions to assemble, screen and train their respective forces and unify them into a national army before the formation of a unity government in May.

Three days ago, the Brussels-based International Crisis Group said in a report that the six-month-old peace deal risked collapse because none of these steps have occurred, just two months before the deadline.

More than half of the population of South Sudan is Christian, while Sudan is predominantly Muslim.

In 2017, Catholic Church leaders in the country said they had expected the pope would visit the capital, Juba, in the autumn of that year. The tentative plans were scrapped because of security concerns.

About 400,000 people have been killed, and more than a third of the country’s 12 million people uprooted by the civil war — a conflict punctuated by multiple rounds of mediation followed by renewed bloodshed.

The original trip was to have lasted only one day for security reasons and the pope was to have flown in after spending a night in another African country. Francis is expected to visit several African countries this year, including Madagascar.

The pope was to have made the 2017 trip to South Sudan with Archbishop of Canterbury Justin Welby, head of the worldwide Anglican communion, in an effort to promote unity in the mostly Christian country.

The conflict sparked Africa’s worst refugee crisis since the 1994 Rwandan genocide and plunged parts of the country into famine.