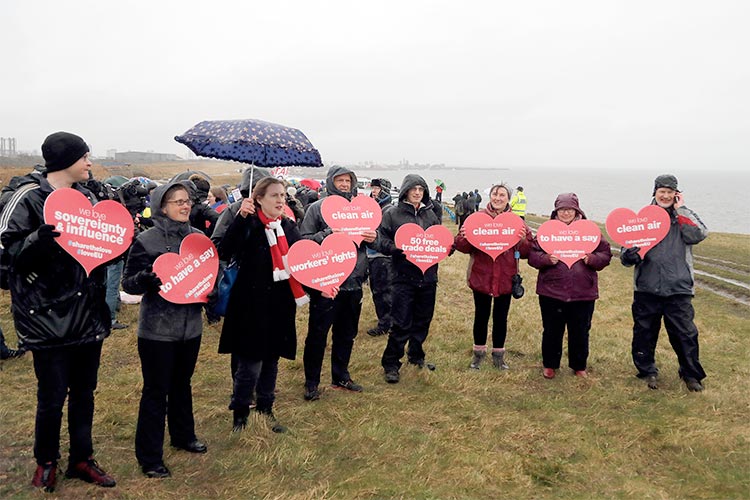 Pro-EU demonstrators protest at the start of the first leg of March to Leave the European Union in Sunderland, England, on Saturday. Associated Press

LONDON: Prime Minister Theresa May’s hopes of getting a Brexit divorce deal through parliament were given a boost on Saturday after a report that the Northern Irish party propping up her government might move towards backing her deal.

The Democratic Unionist Party (DUP), which has 10 lawmakers in parliament, is close to changing its position for the first time after receiving a promise that the government would put into law a requirement that there be no divergence between Northern Ireland and Britain, the Spectator magazine said.

A cabinet minister involved in the talks with the DUP told the Spectator the chances of the party backing the government’s deal were around 60 per cent.

At the other end of the political spectrum, Nigel Farage, the politician who probably did more than anyone else to force Britain’s referendum on membership of the European Union, joined protesters at the start of a 270-mile march over what they call a betrayal of the Brexit vote.

In the pouring rain in Sunderland, northeast England, which was the first place in Britain to declare a vote to leave the EU, Farage, wearing a flat cap and carrying an umbrella, said Brexit was now in danger of being scuttled by the establishment.

“We are here in the very week when parliament is doing its utmost to betray the Brexit result,” Farage said. “It is beginning to look like it doesn’t want to leave and the message from this march is if you think you can walk all over us we will march straight back to you.”

The march, which began with about 100 people, is due to end at parliament on March 29, the day the United Kingdom was supposed to leave the EU. After two-and-a-half years of tortuous divorce negotiations with the EU, the final outcome is still uncertain with options including a long delay, exiting with May’s deal, a disorderly exit without a deal or even another referendum.

To get her deal passed through parliament, May must win over dozens of Brexit-supporting rebels in her own Conservative Party and the DUP lawmakers. She is expected bring back the deal for a third vote after two historic defeats.

The DUP deputy leader Nigel Dodds said the party had good talks with British ministers, including the finance minister, on Friday to see what additional assurances would be needed for them to save her deal.