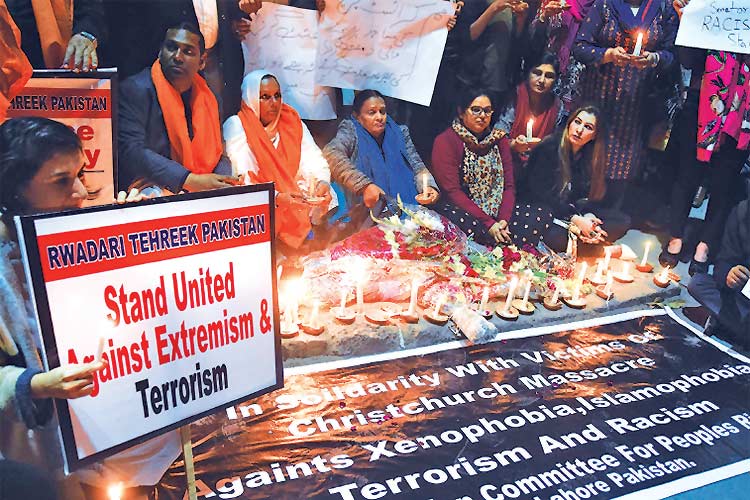 Pakistani demonstrators hold placards and candles during a candlelit vigil the day after the deadly attack on two mosques in Christchurch, New Zealand, in Lahore on Saturday. Agence France-Presse

Foreign Minister Shah Mahmood Qureshi says authorities in Christchurch, where the shootings took place, are trying to determine whether three other Pakistanis who have been missing since Friday’s attack were among the fatalities.

He said on Saturday that the six confirmed dead include 48-year-old Naeem Rashid and his 21-year-old son, Talha Naeem.

Naeem and his son Talha were at the mosque offering Friday prayers when the gunman entered the mosque and began spraying bullets without discrimination, local TV channels reported. While the gunman was busy killing people, the father and son duo tried to overpower him but unluckily they failed, receiving serious gunshot wounds. They died at the hospital.

Identified as Syed Areeb Ahmed, the 27-year-old hailing from Karachi was also confirmed by the foreign office to have lost his life in the brutal terror attack that unfolded in two mosques in Christchurch and Wellington. Reports have revealed that Areeb was travelling to New Zealand on behalf of his company for professional reason.

The news was also later confirmed by Areeb’s cousin on his social media account.

Haroon Muhammad 40, a resident of Rawalpindi, Sohail Shahid 40 and Karachi’s Areeb Ahmed 26 are also among the missing Pakistani citizens, the statement said.

Naeem migrated to New Zealand with his family in 2009 and was a teacher.

The attack on the Al Noor and Linwood mosques, that left at least 49 people dead, has been labelled terrorism by Prime Minister Jacinda Ardern and is thought to be the deadliest attack directed against Muslims in the West in modern times. The dead were said to include women and children. Around 48 people were treated for gunshot wounds at Christchurch Hospital, including young children, with injuries ranging from critical to minor.

A Crisis Management Cell has been established at the ministry of foreign affairs in Islamabad for timely dissemination of information and assistance, a press released issued by Dr Faisal stated.

The 24/7 cell will address the developing situation, provide information and updates on the well-being of Pakistani citizens living in New Zealand, the spokesperson added.

Furthermore, a circular was released by the ministry of foreign affairs in Islamabad notifying details regarding visa facilitation for the immediate family members of the victims.

Dr Khursheed confirmed that his brother, Naeem Rashid and nephew Talha, had been martyred in terror attack on a mosque in Christchurch. He said that his brother was a teacher and added that they hailed from Abbottabad district of Khyber Pakhtunkhwa province.

Pakistan has condemned in the strongest possible terms the heinous terrorist attack on two mosques in Christchurch, New Zealand that resulted in loss of 49  innocent lives.

Addressing the media in Multan, the foreign minister spokes about the mosque attacks in which at least 49 people were killed a day earlier and said, “Around nine Pakistani citizens are still missing. We have been searching for these people since yesterday but their mobile phones are switched off. We will contact their families and provide all possible assistance.”

“Around 300 Pakistanis reside in Christchurch. A list of those injured in the attacks has been released,” he added.

The foreign minister continued, “Unfortunately, Islamophobia seems to be spreading across Europe. Have never before heard of such an incident in New Zealand.