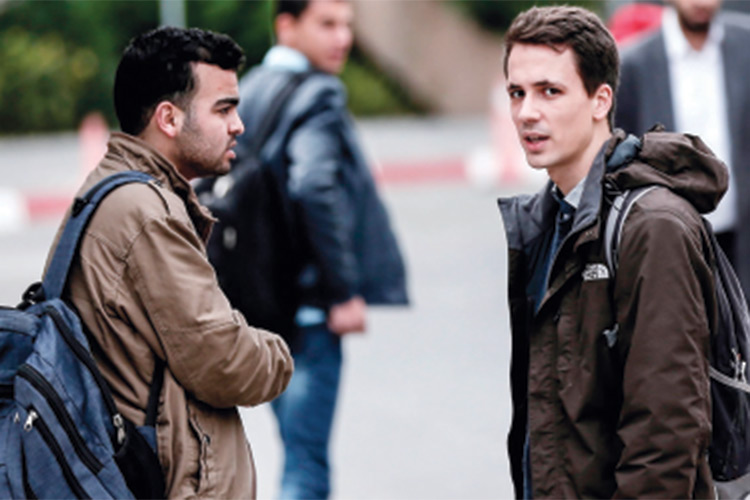 Italian student Riccardo Corradini (right) speaks with a friend at the Islamic university of Gaza in Gaza City. Agence France-Presse

Gaza City: Seated with other students on the steps at the Islamic University of Gaza with his backpack, the young Italian doctor-to-be draws looks from passersby.

Riccardo Corradini is the first exchange student in the Gaza Strip under a popular European programme known as Erasmus and hopes to gain a unique experience in emergency surgery.

When his university in Siena, a city in central Italy’s Tuscany region, announced a year ago that a spot was open to spend a semester studying in the impoverished Palestinian enclave, he didn’t have to think long.

Still, he was the only one to apply.

The sixth-year medical student had already studied in the occupied West Bank two years earlier, but the blockaded Gaza Strip is a different atmosphere.

The strip of some two million people has endured three wars with Israel since 2008 and suffers from shortages of electricity and other infrastructure, like clean water.

But Corradini, 25, says he has been welcomed warmly at the university in Gaza City and is glad to receive hands-on experience in his chosen speciality.

“I came here for many reasons,” said the young Italian who receives training at three Gaza hospitals.

“The first reason is because I want to specialise in emergency surgery, so coming here, I can see with my own eyes unfortunately how emergency surgery is really,” he added, giving the example of a 16-year-old who underwent an amputation.

The past year has flooded hospitals in the Gaza Strip with wounded patients.

In March 2018, Palestinians in Gaza began mass protests along the border fence with Israel.

Since then, at least 255 Palestinians have been killed by Israeli fire, the majority shot during weekly border demonstrations and clashes.

Others have been hit by tank fire or air strikes in response to violence from Israeli-blockaded Gaza.

Two Israeli soldiers have been killed over the same period.

Israel accuses Hamas, the Islamist movement that runs the Gaza Strip, of orchestrating the violence and protests.

Palestinians and rights groups say protesters have been shot while posing no real threat.