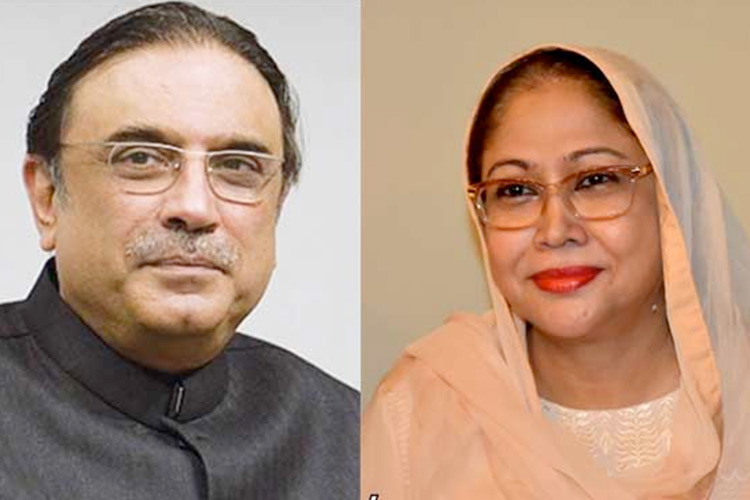 ISLAMABAD: A banking court in Karachi on Friday accepted the request of the National Accountability Bureau (NAB) to transfer the fake bank accounts case against Pakistan Peoples Party co-chairman and former president Asif Ali Zardari, his sister Faryal Talpur and others to the accountability court of Rawalpindi for trial.

Last month, the NAB filed a statement with the trial court on behalf of its chairman Javed Iqbal, stating that the investigation of the case had been transferred to the anti-graft watchdog by the Supreme Court.

Therefore, he requested the trial court to transfer the proceedings of trial in the present case to the accountability court in Rawalpindi.

Following the arguments, the banking court reserved its verdict earlier this week that it now announced, allowing the case to be transferred from Karachi to Rawalpindi.

Subsequently, the banking court cancelled the interim bails granted to Zardari, Talpur and others as the case had been transferred to a different court.

As the verdict was announced, the sons of Anwar Majeed — one of the co-accused — left the court, following which a team of Federal Investigation Agency (FIA) went after them to make arrests.

Zardari appeared before the court after the verdict had been announced. Talpur’s counsel, meanwhile, informed the court that his client was sick, and filed an application for the court to grant her permission to skip the hearing.

In the last hearing, Zardari’s counsel Farooq H. Naek had argued that the Supreme Court, in its verdict in January this year, had ordered NAB to further investigate and not to transfer the case.

He claimed that NAB was trying to “pressurise the banking court” by filing transfer requests as he urged the court to reject the appeal.

Reading out the first information report filed by the FIA, Naek had said that the fake bank accounts case did not fall under NAB’s jurisdiction as it did not include the charges of corrupt practices and corruption. The charges did not include “deceiving the public” either, he added.

Meanwhile, Zardari and Talpur appeared before the investigators and have since secured interim bail from the Banking Court.

Amid complaints from the FIA and barbs flying in the SC, former CJP Nisar had ordered the formation of a Joint Investigation Team to quicken the pace of the investigation. One of FIA’s principal complaints was the lack of cooperation from the Sindh government.

According to the report, the JIT identified 11,500 bank accounts and 924 account holders at the start of their investigation.

In a separate case, the NAB executive board has given approval for initiation of another inquiry against Sindh Assembly Speaker Agha Siraj Durrani to investigate suspicious transactions from his bank accounts.

The Pakistan Peoples Party leader is already in NAB custody in a case pertaining to assets beyond known sources of income as well as allegations of embezzlement.

The executive board further approved the filing of a corruption reference against Mehtab Abbasi, the former governor of Khyber Pakhtunkhwa and senior Pakistan Muslim League-Nawaz (PML-N) leader, for making illegal appointments in Pakistan International Airlines (PIA) during his time as special adviser to prime minister on aviation.

The reference includes former secretary of aviation division Irfan Elahi, Muhammad Ali Tabba and others for illegally appointing Musharraf Rasool as the chairman of the state carrier and causing losses to the national exchequer.

The appointment of Rasool had already been declared illegal by the apex court.

A statement issued by the anti-graft watchdog stated that the two were under investigation over suspected transactions made from their bank accounts.

In total, the board gave approval of filing three references and two inquiries against various suspects, including a corruption reference against Kamran Ali Qureshi, the former chairman of the Capital Development Authority (CDA), and others over alleged abuse of authority.