Hundreds lumber out of last Daesh enclave in east Syria 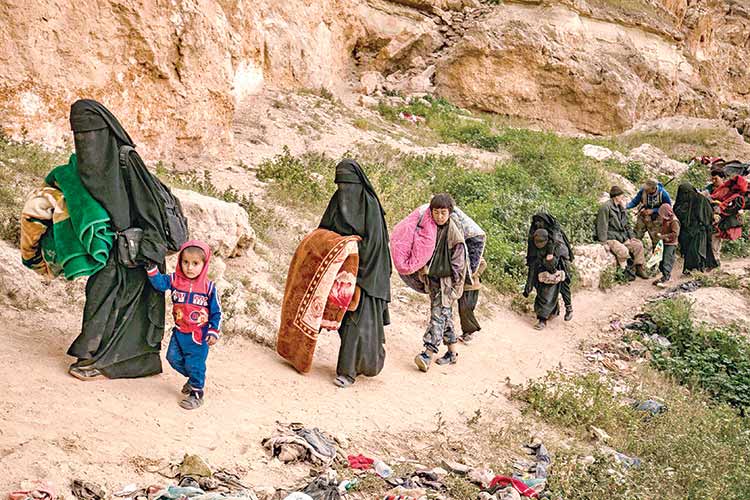 Women and children exit from the village of Baghouz in the eastern Syrian province of Deir Ezzor on Thursday. Agence France-Presse

Hundreds of men, women and children trudged out of a remote eastern Syrian village on Thursday where the Daesh group has been making a suicidal last stand against advancing US-backed forces.

All that remains of a sprawling cross-border “caliphate” the militants declared in 2014 is a battered riverside camp in the village of Baghouz near the Iraqi border.

The Syrian Democratic Forces, and warplanes of a US-led coalition backing them, have rained fire on the enclave since Sunday, blitzing thousands of Daesh members into surrender.

Hundreds more followed on Thursday, slowly walking up the orange cliff overlooking the smouldering Daesh encampment in a bend of the Euphrates River, an AFP reporter there said.

Under the drizzle, men with thick beards struggled on crutches, while women stumbled under the weight of bags stuffed full, one with a toothbrush poking out of a back pocket.

Children followed, covered in dust and hair in disarray. When they saw the journalists, some started crying.

Most of the men appeared to be wounded. One man had an eye patch, another his arm in a sling.

Many, including the children, appeared to be foreigners. A black man held up his hands to hide his face.

SDF spokesman Mustefa Bali said they were leaving after an “intensive offensive” on their last scrap of land by the Euphrates the night before.

“A large number of Daesh militants and their families started to surrender to the #SDF since this morning,” he said in English on Twitter.

Hardliners inside the pocket have been hiding underground from air strikes by a US-led coalition, and unleashing suicide bombers on advancing forces.

A spokesman for the Kurdish units inside the village of Baghouz earlier on Thursday said this was slowing progress.

“Those who stayed inside are mostly suicide bombers blowing themselves up, which is impeding the advance,” said Jiaker Amed, a spokesman for the Kurdish People’s Protection Units (YPG).

Thousands of Daesh family members, as well as suspected militants, have poured out of the shrinking pocket in Baghouz in recent weeks.

Since the offensive resumed on Sunday, 3,000 Daesh members have surrendered, according to the SDF.

About 60,000 people have streamed out of Daesh-held territory since December, the Britain-based Syrian Observatory for Human Rights says, around a tenth of them suspected militants.

The exodus has sparked a humanitarian crisis in Kurdish-held camps for the displaced, where women and children have arrived exhausted after weeks of siege.

These include the wives and children of alleged foreign militants, hundreds of whom are being held by the Kurdish forces.

Save the Children said on Thursday more than 3,500 foreign children from more than 30 countries were estimated to be living in camps in northeast Syria.

The UN humanitarian coordination office OCHA says new arrivals are in a worse state than in previous weeks, but there is hardly space for them at the main camp.

“The conditions within Al Hol camp are over-crowded, uninhabitable and threaten human dignity and life, with people forced to sleep on the ground during... rain and low temperatures,” it said.

The International Rescue Committee says 120 people — mainly young children — have died on their way or after arrival.

At the height of its rule, Daesh implemented its brutal interpretation of religion on millions in territory the size of the United Kingdom across Syria and Iraq.

It churned out violent propaganda to attract foreign recruits.

Syria’s Kurds have repeatedly called for foreign government to repatriate the Daesh suspects they hold, but they have mostly been reluctant.

Since starting with the brutal repression of protests against President Bashar Al Assad, Syria’s civil war has killed more than 360,000 and displaced millions.