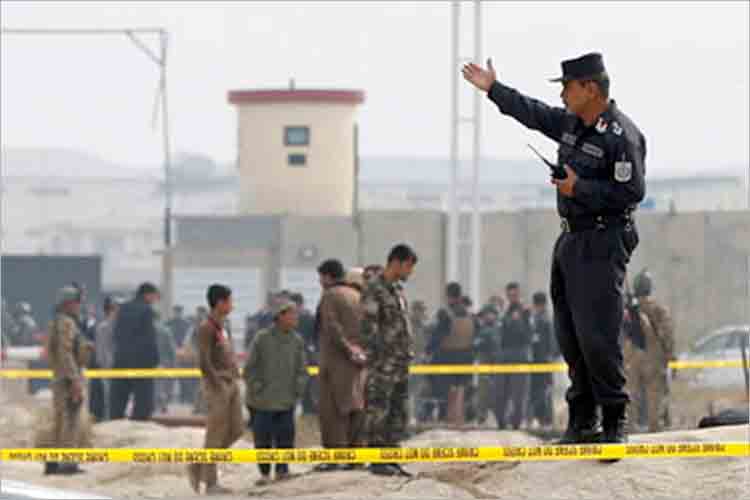 The strikes were carried out in Ghazni province late Wednesday. Agencies

Thirty-one militants, many of them believed to have been Al Qaeda fighters, have been killed in airstrikes in south-eastern Afghanistan, officials said on Thursday.

The strikes were carried out in Ghazni province late Wednesday, where the defence ministry said they targeted a “base” belonging to the militants.

“Qari Aref, one of the facilitators (for Al Qaeda) was transferring these 31 terrorists, including nine suicide bombers, in several cars when targeted by airstrikes and eliminated,” the ministry said.

It described the fighters as all belonging to the Middle Eastern militant group, although a spokesman for the Ghazni governor said fighters from the Taliban-affiliated Haqqani network were also present.

The defence ministry did not specify who carried out the airstrikes. Only Afghan and US forces in Afghanistan conduct airstrikes.

The Ghazni governor’s spokesman, Mohammed Aref Noori, said the strikes had been carried out by US forces, but there was no immediate confirmation of his claim.

Meanwhile, the Taliban political chief, who headed the militants’ delegation during the most recent round of peace talks with the United States, said on Thursday that he was optimistic and assured Afghans that they had no reason to fear a settlement.

“We are very hopeful for the peace talks, because the latest round had some good dialogues which paved the way to more progress regarding peace in the future,” Mullah Abdul Ghani Baradar said in an eight-minute audio tape of an interview conducted by the Taliban and posted online.

Making his first public comments since his release last year from a Pakistan prison, Baradar sought to reassure Afghans who have worried that peace with the Taliban could herald the return of its hardline values.

“If (Afghans) think of us like brothers I trust in God that all the problems will be solved,” Baradar said, speaking in Pashto.

“I ask all our countrymen to be sure there is no need to worry. Everyone will be treated very well,” he added.

“We assure the neighbouring, regional and other countries that the upcoming system will not be against anyone, we are not under the influence of anyone, and have no aim of harm to anyone,” Baradar said.

Baradar also offered a message to Taliban fighters, saying that even though he felt the group had achieved political and military victory, they should remain composed and not become arrogant.

A gunbattle erupted on Thursday between Afghan forces and supporters of a powerful politician in the northern city of Mazar-i-Sharif who rejected the appointment of a new provincial police chief by President Ashraf Ghani, officials said.

At least five civilians and two security force personnel were wounded in the clash, the latest in a series of stand-offs between Ghani and Atta Mohammad Noor, the former governor of Balkh province who has repeatedly defied Ghani’s attempts to retain control over his northern stronghold. Noor is a leading figure in Jamiat-e Islami, a party that represents Afghanistan’s Tajik minority. He served as Balkh’s governor for more than a decade.

Noor accused Ghani of trying to remove a potential rival and divide Jamiat by appointing his supporters to powerful posts to manipulate the presidential elections in July.

In a statement posted online, Noor called on city residents to keep shops and markets closed. He said Ghani must withdraw the appointment of Abdul Raqib Mobarez as the province’s new police chief.

“The presidential palace has always been plotting conspiracies with its arbitrary policies. I ask all residents, men and women, of Balkh to be fully ready for defending their dignity,” said Noor.

A senior official at the presidential palace said Ghani’s decision to appoint a new police chief in Balkh was “free from bias.” Separately, authorities are investigating an errant US bombing of an Afghan military base in the country’s south that killed at least five Afghan troops, a lawmaker said on Thursday.

Lawmaker Obaidullah Barikzai from Uruzgan province said that Afghan soldiers inside the base in Tarin Kot believed a darkened convoy approaching the base was the Taliban — not US and Afghan forces — and opened fire, invoking a blistering retaliation.