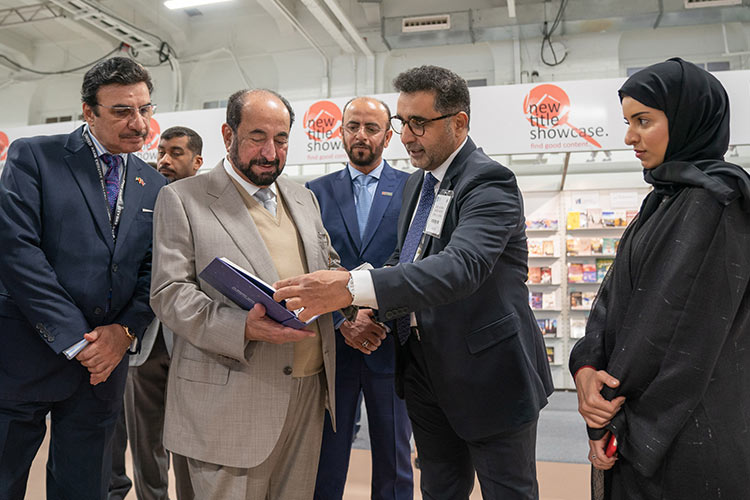 SHARJAH: His Highness Dr Sheikh Sultan Bin Muhammad Al Qasimi, Supreme Council Member and Ruler of Sharjah, has said that the cultural work requires perseverance, patience and diligence, and this work must be built on a solid base to achieve sustainability.

Sheikh Sultan's remarks came during a meeting with the chief editors of newspapers, and a number of local and international media institutions, in line with his visit to the Sharjah Pavilion, represented by the Sharjah Book Authority, at the 48th edition of London Book Fair (LBF).

Sheikh Sultan pointed out that the emirate attempted applying for the title 'World Book Capital' eight times before Sharjah was awarded the recognition, noting that in order to succeed in the cultural sector, concerted and determined efforts must be made to succeed. He also noted the emirate's efforts to serve cultural intellectuals for over 40 years, via several institutions, events and festivals, noting that the successes obtained by Sharjah reflect that of the Arab world, fulfilling messages of cultural cohesion and prowess.

Sheikh Sultan went on to note how the Arab world must take great care in ensuring their ministries of culture thrive, lead by well-informed ministers, and allocated appropriate budgets to support social and cultural growth. He praised the UAE's cultural sector, which is taking a steady steps towards the right direction, by providing human cadres and advanced urban facilities that contribute towards its advancement.

He also addressed a number of geographical and historical topics, which are of special interest to His Highness, pointing out the importance of these topics to better understand the customs, cultures and traditions of the peoples that are vary in their beliefs, ideas and lifestyles.

Sheikh Sultan concluded by calling upon the writers in general and journalists in particular to take care of the selection of the topics they address, where their writings should be based on documented scientific facts and there is no objection on expressing opinions, which must not be impose on the reader as if it is the absolute truth.

Accompanied by Sheikha Bodour Bint Sultan Al Qasimi, Vice President of the International Publishers Association, IPA, His Highness visited the pavilion of the emirate of Sharjah, and listened to a brief on the most important titles, and the pretence of the pavilion on the first day, noting that the first participation of the Emirate of Sharjah in London Book Fair began in 2006.

Sheikh Sultan also visited the Emirates Publishers Association's pavilion, and met with a number of the association’s council members, who also reviewed the most important achievements of the Association and its future plans.

Sheikh Sultan toured a number of Arab and foreign publishing houses, and check on the most important achievements in the world of publishing and translation.