Over 20 shops buried in Doda landslide 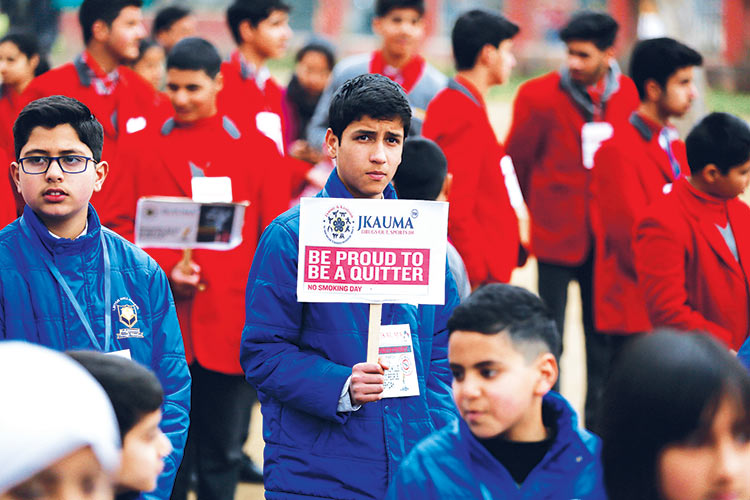 Schoolchildren participate in a rally marking No Smoking Day in Srinagar on Wednesday. Associated Press

Jammu: Over two dozen shops were buried following a landslide on Wednesday in Jammu and Kashmir’s Doda district, police said. No loss of life was reported.

The landslide hit Bhalessa area around 4am and buried the Bathri Market shops. The spot is nearly 60 km from Doda town.

Earth-moving machines have been rushed to the spot.

Separately, former Chief Minister Omar Abdullah on Monday criticised Prime Minister Narendra Modi for not giving the people of Jammu and Kashmir the right to choose a state government.

Abdullah was reacting to Modi’s appeal to people to vote in large numbers to increase participation in the democratic exercise.

“Dear @narendramodi Sahib, it is good to see you appealing to famous people to increase voter turnout. However, at the same time, your government has consciously disenfranchised people in J&K by not holding Assembly elections on time,” the National Conference leader tweeted.

Abdullah was highly critical of the central government, saying that the state was governed by New Delhi’s nominee.

The Election Commission has decided not to hold the Assembly elections simultaneously with the Lok Sabha polls in the state.

Moreover, for a father to shoulder the coffin of his son is believed to be the heaviest and the most painful load in the World, but for Farooq Ahmad Khan, the father of Mudasir Ahmad Khan, the tragedy has been even more painful.

“The security forces told me that one of the two completely charred dead bodies belonged to my son. I could not identify Mudasir’s body and had little choice other than pick one of them and go home and mourn”, Farooq Ahmad said.

Asked how he or the security forces were sure that Mudasir had been killed in the gunfight in Pinglish village, the wailing father said villagers had seen Mudasir that evening there and after the security forces told him they had killed his son, he had little choice other than believe the worst.

Even in his hour of extreme sorrow, the father is not 100 per cent sure he has brought his son’s dead body home.