Guaido vows to oust Maduro as thousands of Venezuelans protest 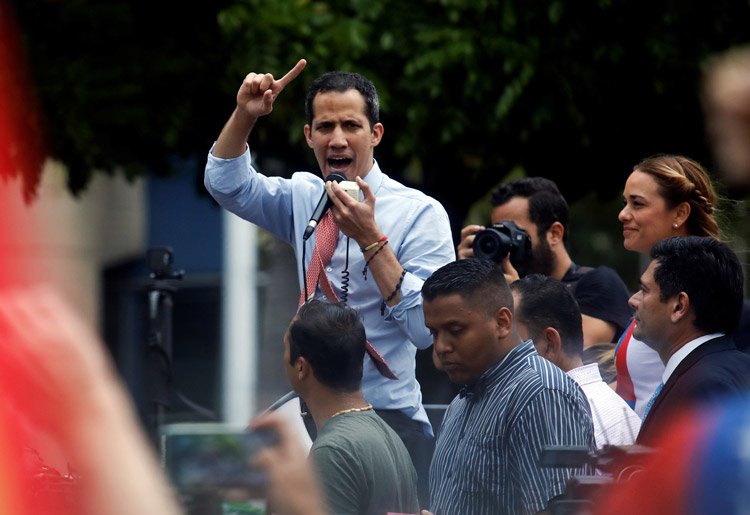 CARACAS: Venezuela’s opposition leader Juan Guaido vowed on Tuesday to take Nicolas Maduro’s place in the presidential palace “very soon,” as thousands of people took to the streets of Caracas to protest.

“We need an office to work in, so very soon, and when we have the armed forces totally on our side, we’ll go to find my office there in Miraflores. Very soon,” Guaido told supporters, who chanted back: “Yes, you can!”

Demonstrators banged pots and sounded car horns at the protest in a square in the east of the capital. Many waved large banners calling on Maduro to go.

“The situation is very difficult, we are hoping that this government will change. We’ve had enough of this chaos!” said one of the demonstrators, Miguel Gonzalez.

“With courage and strength I asked you to believe in yourselves, that Venezuela would emerge from the darkness, that the end of the usurpation is very close,” said Guaido, who is recognized as interim president by more than 50 countries.

Venezuela’s state prosecutor, Tarek William Saab, told reporters he would place Guaido under investigation for “his alleged involvement in the sabotage of the Venezuelan electric grid.”

It is the first government move against the US-backed Guaido since his return to Venezuela last week after defying a travel ban to visit several allied South American leaders.

Maduro has blamed a devastating multi-day blackout plaguing Venezuela on Washington, and declared “victory” in what he called an “electricity war” triggered by the Pentagon.

He also called for support from allies including Russia and China as well as the United Nations in investigating the US “cyber attack” he said was responsible for the blackout.

While Maduro pointed the finger at Washington, critics have long blamed the government for failing to maintain the power grid.

Guaido, 35, is seeking to capitalize on public anger over the blackout, which has piled misery on a population suffering years of economic crisis and shortages of food and medicine under Maduro.

The youthful opposition chief — locked in a power struggle with Maduro since declaring himself interim president on Jan.23 — has branded the socialist leader a “usurper” over his re-election in May, widely dismissed as neither free nor fair.

Outlining the case against Guaido, Saab said the opposition leader had disseminated a series of messages that have “stoked violence.”

“At this moment, he appears as one of the intellectual authors of this electrical sabotage and is practically calling for a civil war in the middle of this blackout,” Saab said.

It has already targeted a growing list of individuals and companies linked to the Maduro government, including state oil company PDVSA.

At Guaido’s urging, the opposition-dominated National Assembly declared a “state of alarm” on Monday to pave the way for the delivery of international aid, 250 tons of which has been stuck for a month at Venezuela’s borders with Colombia and Brazil.

However, with Maduro controlling the military and security services — which are currently preventing aid from entering the country — he has no means of enforcing it.

Maduro used the military to begin distributing food, water and other assistance in several districts on Tuesday.

Marshalled by security forces, crowds formed impatient lines at water trucks in some areas, as they waited to fill containers. But tensions were running high amid the shortages.

“I saw people lining up for a kilogram (2.2 pounds) of rice, and the shopkeepers had to fire shots in the air to keep the lines under control,” Alberto Barboza, 26, told AFP in the oil capital Maracaibo.

“I heard a lot of shooting,” said Barboza, adding that a local bakery and a tire shop were looted.

The blackout has left millions without running water. Many people lined up to buy bottled water in Caracas supermarkets, but most are reduced to desperate means — besieging fountains in public parks and any available water sources around the capital.

Maduro had called for armed grassroots groups known as “colectivos” to hit back against what he called attacks encouraged by the US against the country’s electrical grid.

The opposition says the colectivos have been armed by the government and act as militia.

Power has been restored to some areas since the weekend, but service has been intermittent and often drops out.

Businesses and schools remained shuttered on Maduro’s orders, as they have been since the blackout began.

Luis Carlos Diaz, a well known Venezuelan journalist who was detained Monday, was released Tuesday and will be charged with hacking the electrical grid in connection with the blackout, the national press union said.

As the situation worsened, US Secretary of State Mike Pompeo announced Washington is withdrawing all its remaining personnel from the US embassy in Caracas. All non-emergency staff were ordered to leave on Jan.24.

The State Department said all US citizens residing or traveling in Venezuelan “should depart” the country, citing “crime, civil unrest, poor health infrastructure and arbitrary arrest and detention of US citizens.”