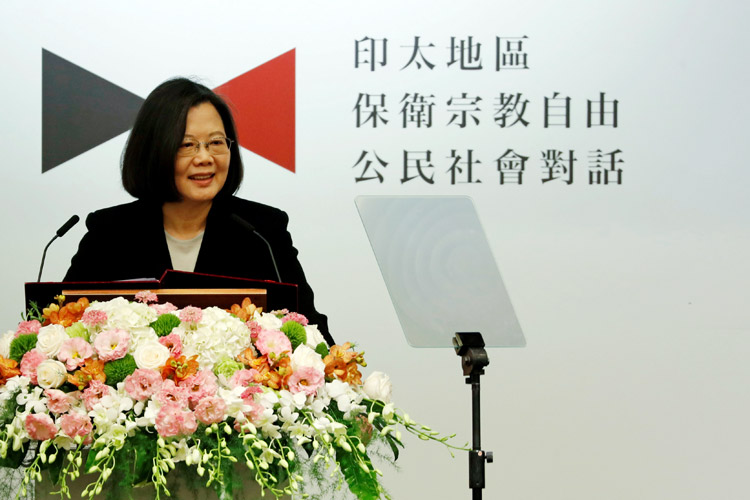 TAIPEI: Taiwan President Tsai Ing-wen will next week visit the island’s diplomatic allies of Palau, Nauru and the Marshall Islands, a government official said on Tuesday, with a possible stopover in US territory that would likely anger Beijing.

The visit comes amid heightened tension between Taipei and Beijing, which claims self-ruled Taiwan as its own and has vowed to bring the island under Chinese control, by force if necessary.

The aim of the eight-day visit, starting on March 21, was to “deepen ties and friendly relations” with Taiwan’s Pacific allies, Deputy Foreign Affairs Minister Hsu Szu-chien told a news briefing.

Taiwan authorities were still in talks regarding a possible stopover in US territory, he added.

A person with knowledge of the matter told Reuters the stopover would most likely be in Guam or Hawaii, with the chance of at least one visit to US territory “very high.”

China says Taiwan has no right to state-to-state relations. The island has formal ties with 17 countries, almost all small, less developed nations in Central America and the Pacific, like Belize and Nauru.

Taipei has accused Beijing of offering generous aid and loan packages to lure its allies away, accusations Beijing denies.

The United States, like other major powers, maintains a “one China” policy that prevents formal diplomatic relations with Taiwan but it is the island’s largest weapons supplier and most powerful international backer.

That relationship has been boosted under US President Donald Trump, whose administration is eyeing more weapons sales and encouraging official exchanges.

Brownback’s visit to Taipei was viewed by some in Taiwan as a sign of support from the Trump administration.

China’s hostility to Taiwan has grown since Tsai’s election as Beijing fears she wishes to push for the island’s formal independence.

Tsai says she wants to maintain the status quo but will defend Taiwan’s democracy.

On Monday evening, Tsai called a national security meeting during which she urged the administration to counter Chinese President Xi Jinping’s “one country, two systems” proposal that Beijing uses to push for “reunification” with Taiwan.

Tsai called on government officials to come up with measures to “counter” China’s renewed efforts to “interfere” and to “absorb” Taiwan’s capital and talents.

“The Beijing authorities continue to utilize our open and free system of democracy to interfere with Taiwan’s political, economic and social developments, which has become the biggest risk in Taiwan,” Tsai said in a statement.

The former British colony of Hong Kong returned to Chinese rule in 1997 under a “one country, two systems” formula, that granted the financial hub a high degree of autonomy.