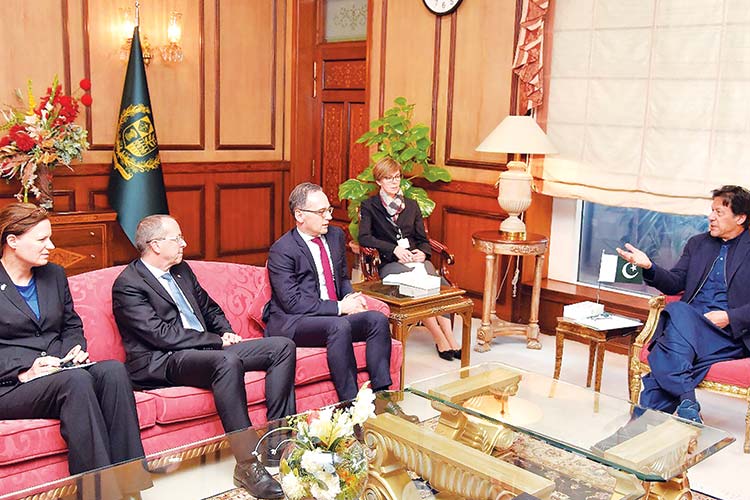 Pakistan has become deputy chairman of general body of the Parliamentary Union of Organisation of Islamic Countries (OIC).

Besides this, Pakistan’s woman representative Naureen Farooq has also been elected vice president of the 8th Muslim Women Parliamentarians Conference.

According to an official announcement, Pakistan has been elected deputy chairman of the general body of parliamentary union of OIC on the first day of its four-day conference being held in Rabat, Morocco.

The Parliamentary Union of the OIC is composed of parliaments of member states of the Organisation of Islamic Cooperation. It was established in Iran on June 17, 1999, with its head office situated in Tehran.

The main objective of sending the Pakistani delegation to the conference is to effectively highlight the long-standing issue of Kashmir before the whole world.

In a separate news sent by the reporter, a Senate Special Committee has decided to summon federal Minister for Water Resources Faisal Vawda to ask him the reason for not attending meetings of the Standing Committee on Water Resources.

The committee titled “Special Committee to provide mechanism for implementation of recommendations of the Committees adopted by the House” was considering the matter referred by the Senate chairman regarding continuous absence of Vawda from meetings of the standing committee concerned.

Committee secretary Hafeezullah Sheikh informed the meeting that the chairperson of Standing Committee on Water Resources, Senator Shammim Afridi, had lodged a complaint that the minister was not attending its meetings.

“The Senate chairman has referred the matter to us so that the committee could look into it and send a report to him,” he said.

Pakistan Muslim League-Nawaz (PML-N) Senator Javed Abbasi said that, according to rules, it was mandatory for ministers and secretaries to attend meetings.

“Afridi should have moved a privilege motion against the minister. Had I been the chairman of the committee concerned, the minister would not have been able to skip its meetings,” he said. “It shows weakness of the chairperson who has requested the Senate chairman to intervene rather than referring the matter to the privilege committee.” The ‘Committee on Rules of Procedure and Privileges’ considers matters regarding the procedure and conduct of business in the house and disposes of privilege motions moved by members of the house.

Committee chairman Dilawar Khan said that the minister should be called so that he could explain his position and reasons for not attending the meetings.

Pakistan Tehreek-i-Insaf (PTI) Senator Walid Iqbal said that, according to his information, Vawda had attended the last meeting of the Standing Committee on Water Resources and suggested that the matter should be concluded.

“I would like to pay tribute to the generosity of the people of Pakistan for raising Rs10 billion for the Dams’ Fund,” he said in a tweet.

Mian Saqib Nisar, the then Chief Justice of Pakistan, took the initiative of collecting donations by launching the fund in July, 2018 that was later joined by the prime minister, making it a joint venture to overcome Pakistan’s water scarcity.

In a televised address to the nation last year, Khan had appealed to the estimated nine million overseas Pakistanis, particularly those living in European countries and the United States, to contribute at least $1,000 per head “to the noble cause”, and warned that Pakistan could face famine-like conditions by 2025 if new water reservoirs were not built.

“I want to commend Chief Justice Mian Saqib Nisar [for starting the dams fund], but this was not his job,” he had said. “This was the job of civilian leaders who knew this was going to swell into a crisis but did nothing to thwart it.” However, after the top judge’s retirement in January this year, the collection for the dam fund has tremendously slowed down. The new chief justice, Asif Saeed Khosa, had not talked about this campaign.