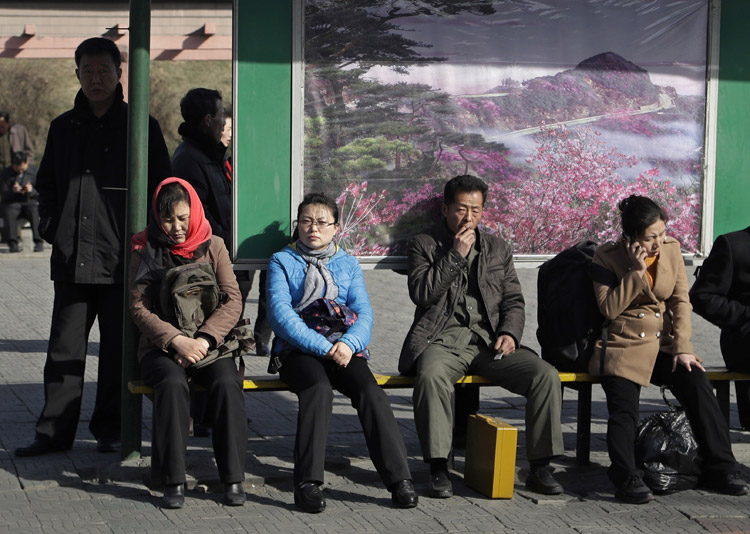 North Koreans sit at a stop as they wait for trams in Pyongyang, North Korea, on Tuesday, March 12, 2019. Dita Alangkara/ Associated Press

PYONGYANG: Turnout in North Korea’s single-candidate elections hit 99.99 per cent this year, state media said on Tuesday — up from a seemingly unimprovable 99.97 per cent the last time they were held.

With participation figures that Western democracies would never achieve, millions of North Koreans head to nationwide polls every five years to elect the rubber-stamp legislature known as the Supreme People’s Assembly.

But with only one approved name on each voting slip in the isolated country, which is ruled with an iron grip by Kim Jong Un’s Workers’ Party, the result is never in doubt.

This year’s turnout fell just short of 100 per cent as those “abroad or working in oceans” were unable to take part, the North’s official KCNA news agency reported.

Like in 2014, results for the nationwide election held at the weekend came in 100 per cent in favour of all named candidates.

“All the electors participated as one in the election to cement our people’s power as firm as a rock,” KCNA said, citing a report released by the Central Election Committee.

“One hundred per cent of them cast their ballots for the candidates for deputies to the SPA registered in relevant constituencies,” it added.

A detailed list of the 687 candidates was not immediately available.

But leader Kim’s younger sister and close aide Kim Yo Jong was among the newly elected according to the South’s Yonhap news agency, citing Pyongyang state media.

Critics say the North’s election — with its total absence of electoral competition — is largely a political rite for enabling the authorities to claim a mandate from the people while reinforcing loyalty to the government and social unity.