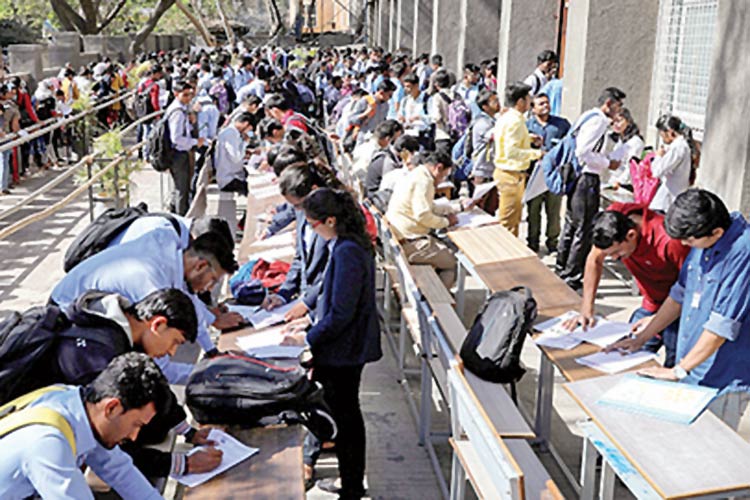 Jobseekers fill up forms during a job fair in Chinchwad on Thursday. Reuters

CHINCHWAD: Santosh Gurav gained a bachelor’s degree in technology from a mid-tier college in western India last year, specialising in electrical engineering and hoping to land a job in industrial automation.

Six months on, the 27-year-old repairs mixer-grinders, table fans and other household appliances at a cramped shop in the western city of Pune. On better days, he picks up broken LED lights from scrap dealers, fixes them, then sells them. He earns about $50 a month, just enough to cover the rent for the room he shares with two others as his home.

“I haven’t even started repaying my education loan,” said Gurav, referring to the nearly $4,000 he’d borrowed for his undergraduate study.

He is one of hundreds of thousands of engineers - studying everything from computer code to civil engineering - that India’s education system churns out each year, many with large loans and little prospect of finding a job in their field.

They highlight Prime Minister Narendra Modi’s difficulty in fulfilling a promise he made weeks after coming to power in 2014: creating millions of jobs by boosting manufacturing under a flagship ‘Make in India’ project launched with much fanfare.

“Come, Make in India, we will say to the world, from electrical to electronics,” Modi said in his maiden Independence Day speech as prime minister, pledging to create up to 100 million new jobs by 2022.

Four years on, the programme’s impact on job creation is unclear and growth in the manufacturing sector has been sluggish, partly due to a lack of land and labour reform.

India’s unemployment rate rose to 7.2 per cent last month, up from 5.9 per cent in February 2018, according to data compiled by the Centre for Monitoring Indian Economy (CMIE) think tank. The figures are more recent than government data and many economists regard them as more credible.

The data, which is an estimate based on household surveys, shows 31.2 million people were actively looking for jobs in February this year, said Mahesh Vyas, the CMIE managing director. It did not have a breakup for engineering or technology graduates.

With more than half of India’s population under 25 years of age, critics say the votes of jobless youth could hurt Modi’s chances of securing a second term in the upcoming general election to be held in April-May.