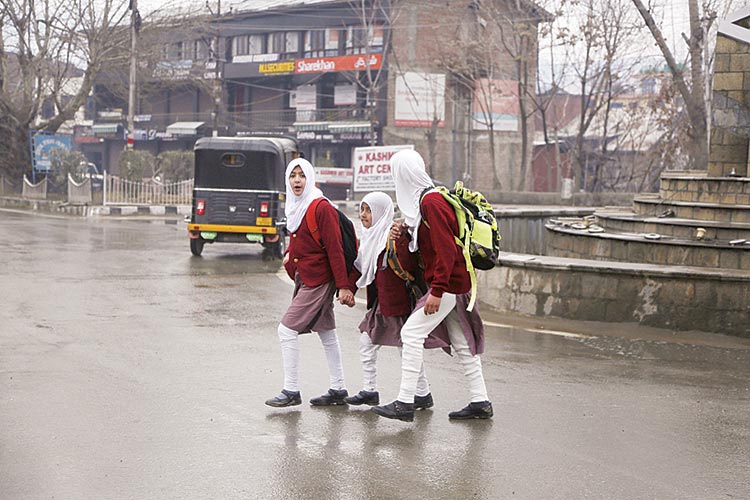 Kashmiri schoolgirls walk to their school in Srinagar on Monday. Associated Press

Srinagar : A Jaish-e-Mohammed (JeM) militant who was a key conspirator behind the car bombing that killed 40 CRPF soldiers has been shot dead by security forces in Jammu and Kashmir’s Pulwama district, officials said on Monday.

“Mudasir Khan alias Mohammad Bhai, the key conspirator in the Feb.14 terror attack in Pulwama, has been eliminated along with his Pakistani accomplice Khalid,” Lt Gen KJS Dhillon of the city-headquartered Chinar Corps told the media.

Mudasir Khan and Khalid were killed in a gunfight in Pinglish village in Tral area late on Sunday. The house where they had taken shelter was destroyed.

“We have started aggressive operations to eliminate the JeM leadership in the Kashmir Valley,” he said.

But the Corps Commander warned that terror launch pads were still intact across the Line of Control (LoC) in Pakistan and that more militants were waiting to sneak in to the Valley.

CRPF Inspector General (Kashmir Sector) Zulfiqar Hassan said that the killing of Mudasir Khan and his accomplice was “very significant” as they had been involved in attacks on CRPF personnel.

He, however, added that the security forces’ job had not been fully accomplished because some key players, including those who indoctrinated Mudasir Khan and provided explosives to him, were still at large.

Police said that Mudasir Khan hailed from Midoora village in Tral area. His body was identified by his family.

According to police, both Mudasir Khan and Khalid were affiliated to the Pakistan-based JeM and were wanted for a series of crimes including attacks on security establishments.

The JeM claimed responsibility for the Feb.14 audacious suicide bombing of a CRPF convoy in Pulwama district which left 40 troopers dead − the worst loss suffered by security forces on a single occasion since militancy erupted in Jammu and Kashmir in 1989.

The killings led a major crisis in India-Pakistan relations. Raising the ceasefire violations along the LoC by the Pakistan Army, Lt Gen Dhillon said that the Pakistanis were targeting civilians.

“In Kamalkote (area of Uri), two days back, four civilians were injured in Pakistani shelling of civilian areas close to the LoC,” he said.

The winding LoC divides Jammu and Kashmir between India and Pakistan.

Meanwhile, citing constraints over availability of central forces and other logistics, the Election Commission said the elections for the Jammu and Kashmir Assembly will not be held along with the Lok Sabha polls.

The decision to hold only parliamentary elections in the state attracted strong criticism from former chief ministers Omar Abdullah of the National Conference and Mehbooba Mufti of the People’s Democratic Party (PDP).

While announcing the schedule for the seven-phase Lok Sabha polls on Sunday, Chief Election Commissioner Sunil Arora said the poll panel was constantly monitoring the situation in Jammu and Kashmir and will take a decision about the Assembly elections soon.

“Constrains of availability of central forces and other logistics, requirement of central forces for security of candidates in the wake of the recent incidents of violence and keeping all other challenges in mind, the EC has decided to announce only the parliamentary elections at this stage,” Arora told the media.

The EC has been continuously assessing the prevailing situation in the state, requirement of central forces and other logistics for holding elections, requirement of security of candidates and preparedness of the state on key factors including the recent developments, he said.

Arora said the decision to not hold the two polls simultaneously was taken based on inputs given by all the stakeholders, including the Home Ministry, political parties, central and state agencies and district administrations.

“Based on the inputs and recommendations of all the stakeholders, we have decided to announce only the parliamentary elections. The EC will regularly and on real time basis monitor the situation and take inputs from all the stakeholders. A decision on Assembly elections will be taken soon,” added Arora.