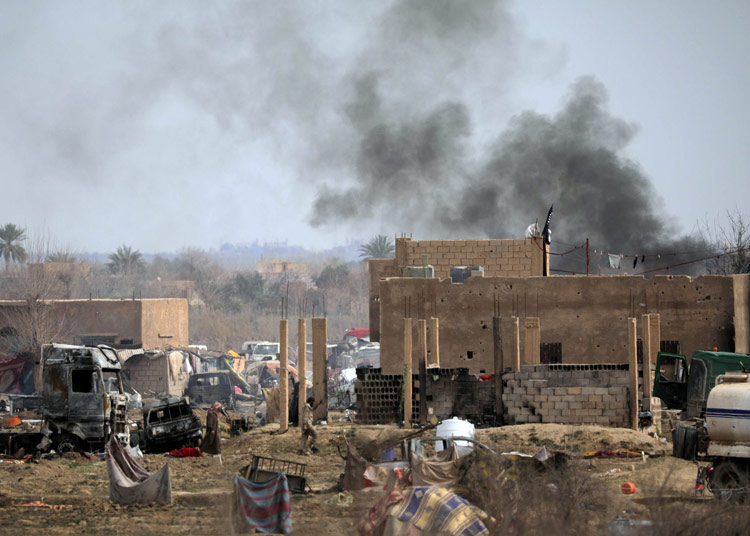 OMAR OIL FIELD: Kurdish-led forces pounded the last scrap of land held by Daesh on Monday, a scattering of tents and destroyed buildings in a remote eastern Syrian hamlet.

The extremists once ruled over millions in a swathe of Syria and Iraq, but they have since lost all that territory except for a riverside bastion near the Iraqi border.

The US-backed Syrian Democratic Forces paused their months-old offensive against the shrinking holdout multiple times for thousands of dust-covered women, children and men to flee, including suspected extremists.

But after that human flow slowed to a trickle, the Kurdish-led force late Sunday told remaining Daesh fighters time was up for any surrenders and they were moving in.

By Monday morning, the SDF had seized several positions from holdout extremists, an official with the US-backed forces said.

“Daesh is fighting back with heavy weapons and attempted to carry out suicide bombing a couple of times,” he said.

The warplanes of a US-led coalition and mortar fire overnight pounded weapons caches, and tank fire targeted Daesh positions, he and a spokesman said.

It was unclear how many people remained inside the pocket in the village of Baghouz on the banks of the Euphrates River, SDF spokesman Mustefa Bali said late Sunday.

The SDF launched the renewed assault on Sunday after no civilians were observed to remain in the riverside encampment.

“During the advance, if our forces notice the presence of civilians our special units will do the necessary to bring them away from the clashes or even work to evacuate them from the battle” zone, he said.

“The operation will continue until Baghouz is liberated and until the end of the terrorist military presence in that area,” he added.

Since December, nearly 59,000 people have left the last Daesh redoubt, according to the Syrian Observatory for Human Rights, around a tenth of them suspected jihadist fighters.

The last Daesh fighters are hunkering down in an area that includes a dismal camp of pickup trucks and cloth-covered trenches by the reedy banks of the Euphrates.

On the frontline Saturday, AFP journalists saw figures wearing the long black clothes of women stroll inside, and bearded men zip down dirt tracks on motorbikes.

The SDF pushed into the Daesh encampment some 10 days ago, discovering spent ammunition, pots and pans lying between hastily-dug trenches and berms.

At the height of its brutal rule, Daesh controlled a stretch of land in Syria and Iraq the size of the United Kingdom.

The extremists had their own courts, currency and school curriculum, and meted out bloody punishment to anyone who disobeyed their rule.

The total capture of the Baghouz camp by the SDF would be a symbolic blow to Daesh, and mark the end of the cross-border “caliphate” it proclaimed in 2014.

But beyond Baghouz, Daesh retains a presence in Syria's vast Badia desert and sleeper cells in the northeast.

They have continued to claim deadly attacks in SDF-held territory in recent months, and the US military has warned of the need to maintain a “vigilant offensive.”

The United States is expected to keep 200 “peace-keeping” troops in Syria after the end of the offensive, despite President Donald Trump's shock announcement in December that all 2,000 American soldiers would leave.

The exodus out of Baghouz in recent months has sparked a humanitarian crisis, leaving aid organisations struggling to cope.

Those fleeing Baghouz have emerged exhausted and hungry after a prolonged siege, with many children suffering from malnutrition.

After fleeing the pocket, SDF members screen the crowds to weed out suspected extremists and detain them.

Vetted civilians, including foreign women and children related to Daesh, are trucked to Kurdish-run camps for the displaced in the northeast of the country.

More than 100 people — mostly young children — have died on the way to the camp of Al-Hol or shortly after arriving, according to the International Rescue Committee aid group.

Syria's Kurds hold hundreds of foreigners accused of fighting for Daesh as well as members of their families.

But their home countries have mostly been reluctant to take them back, with Britain stripping several women who have joined Daesh of their nationalities.

Morocco said it had repatriated eight of its nationals from Syria on Sunday, who will be investigated for “suspected involvement in acts linked to terrorism.”