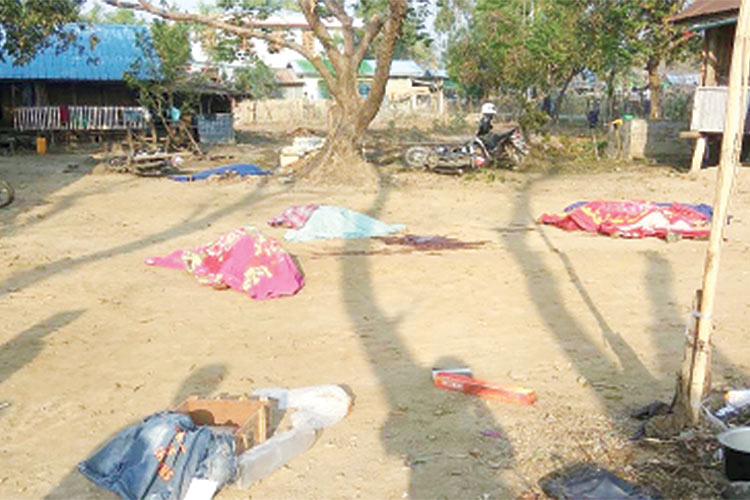 Bodies of policemen killed in a militant attack are covered at the Yoetayoke police station in Rakhine State on Sunday. Agence France-Presse

YANGON: Arakan Army insurgents killed nine Myanmar police in the latest attack in the country’s western Rakhine State, the government said on Sunday, as clashes threaten to engulf a large part of the troubled region.

Villagers heard gunfire as fighters from the armed group, which recruits from the mainly Buddhist Rakhine ethnic group, raided a police post in the village of Yoe Ta Yoke late on Saturday night.

The Myanmar Ministry of Information said on its Facebook page that nine police, all of them recruits from nearby the village, were confirmed dead and one other was still missing on Sunday.

“Around 60 members of the AA terrorist group attacked using small and large weapons,” the statement said.

Saturday night’s attack took place about 50km north of the Rakhine state capital Sittwe, along the main road connecting the city with the rest of Myanmar.

A villager in his fifties told Reuters that two policemen stationed at the post survived the attack, which took place shortly after 11pm.

“The battle went on for about 20 minutes,” said the villager, who asked not to be named. “I was in village at that time and I heard gun shots, but the villagers didn’t run away.”

Myanmar’s military said in a separate statement on Sunday that troops clashed on Saturday with about 200 men from the Arakan Army at a different location, along Myanmar’s border with Bangladesh.

The insurgent Arakan Army killed 13 police in a similar attack further north in January and has frequently clashed with Myanmar security forces since December.

Myanmar’s leaders vowed to crush the rebels, who are fighting for autonomy for Rakhine, but clashes have spread to new areas, displacing more than 5,000 people in all.

Authorities have declared large parts of the north of the state off-limits to most aid agencies.

In 2017, attacks on security posts by insurgents from the Muslim Rohingya minority provoked a military crackdown in the north of the state.

A team from the office of the International Criminal Court prosecutor was in Bangladesh last week for a preliminary probe into alleged atrocities committed against the Rohingya by the Myanmar military in 2017.