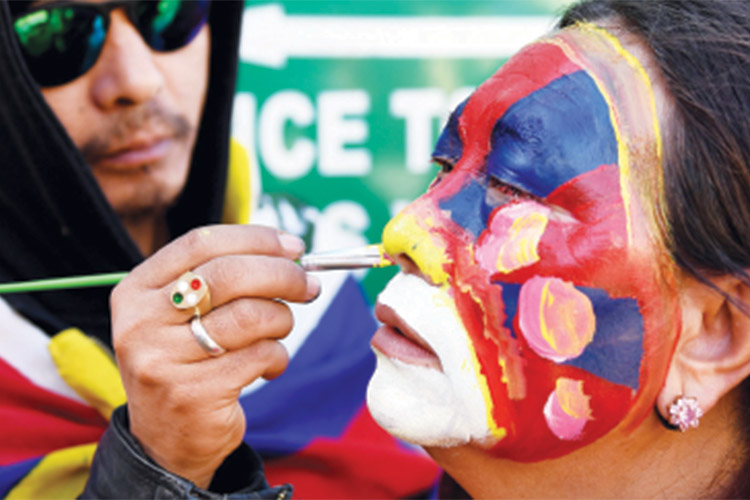 A woman gets her face painted outside the Dalai Lama’s temple in McLeod Ganj, India, on Sunday. Agence France-Presse

Pakistan said on Sunday that the Indian government and media continue to spread disinformation to mislead the international community and its people for domestic political gains while trying to cover up its failures and resultant embarrassment.

“Pakistan, on the other hand, responded with maturity, responsibility and resolve in all domains including political, information and response to Indian act of military aggression,” a statement issued by the Pakistan Foreign Office (FO) said.

It said Pakistan has categorically rejected Indian allegations about the Pulwama attack, which had indigenous origin, including the use of local explosives and vehicle, miles away from the Line of Control (LoC).

“This explains it all. Notwithstanding all this, the prime minister of Pakistan offered co-operation in investigations and asked for actionable evidence from India, in response to which a dossier was received on Feb.28, 2019, a day after the second Indian violation of Pakistan’s airspace. The dossier is being examined and update on it will be shared in due course,” the statement said.

It said the air intrusion and attempted strike near Balakot (Khyber Pakhtunkhwa) through Azad Jammu & Kashmir by Indian Air Force (IAF) was in complete violation of relevant provisions of the UN Charter and international law, as it constituted unlawful use of force against the territory of Pakistan.

The statement said Pakistan, exercising its right of reprisal, acted on Feb.27, 2019 from within Pakistani airspace “displaying our capability, capacity and responsible attitude, by taking 6 strikes (4 targets) on non-civilian and non-military targets with clear intent not to cause any damage to life or infrastructure.”

It said that on the other hand on 27 Feb.27, 2019, IAF with belligerent intentions once again violated Pakistan’s air space. Pakistan in exercise of its right of self-defence under the UN Charter exercised the legitimate use of force while staying within its air space, against two Indian aircrafts that had intruded into Pakistani air space. As a consequence, both Indian aircraft were successfully shot down by Pakistan Air Force, it added.

Rejecting Indian claim about shooting down on F-16, the statement said it was completely baseless meant only to satisfy Indian domestic audience “but in the process they also exposed their lies one after another.”

It said Pakistan urges the international community to stop Indian government from committing heinous human rights violations (documented in the OHCHR Report of June 2018) and brutalities such as rape, blinding of women, children and youth through use of pellet guns, forced exodus for demographic re-configuration, to suppress indigenous movement in Kashmir, on the pretext of “counter-terrorism measures.”

“Pakistan stands in full support — moral, political, diplomatic — as well as in solidarity with the people of Kashmir in their legitimate struggle for their right to self-determination and desires peaceful resolution of the Kashmir dispute in accordance with the aspirations of people of Jammu and Kashmir, as enshrined in the relevant UN Security Council Resolutions..

Regarding Indian allegations on terrorism, the statement said the whole world recognises Pakistan’s successful fight against terrorism. “Having tackled the direct threat of terrorism, the efforts to root out extremism are underway since 2014 through National Action Plan. The linking of ongoing efforts in this regard to Pulwama is part of the Indian agenda for domestic political gains.”

The recent Pakistan-India crisis has eased significantly as high commissioners of both countries returned to their places of posting to resume their diplomatic work.

High commissioners Sohail Mahmood and Ajay Bisaria returned to New Delhi and Islamabad, respectively, 11 days after the tensions between their countries peaked with Indian aircraft intruding into Pakistani airspace on Feb.26 and claiming to have hit alleged terror bases.

Tensions began to defuse after intervention by influential world capitals when they saw the escalation rapidly moving on a dangerous track.

Pakistan unilaterally took the initiative of announcing the return of its high commissioner to Delhi on March 5, besides reaffirming its commitment to continuing negotiations on proposed Kartarpur Corridor agreement and resuming military hotline communication between the operations directorates at the level of directors general. India took four days to reciprocate and on Friday night announced that its high commissioner Bisaria too would be returning to Pakistan.