Guaido calls for march on Caracas as blackout drags on - GulfToday

Guaido calls for march on Caracas as blackout drags on 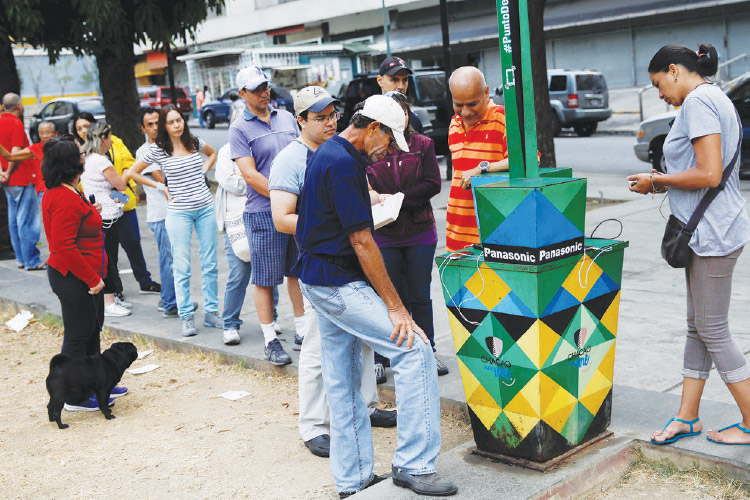 People line up to charge their phones with a solar panel at a public square in Caracas, Venezuela, on Sunday. Reuters

Venezuela’s embattled President Nicolas Maduro grappled on Sunday with a crippling power outage and mounting protests as a top White House aide said members of the country’s military were talking about possibly shifting allegiance to the opposition.

Opposition leader Juan Guaido has called for a nationwide march on Caracas to crank up the pressure on Maduro, as the country entered its fourth day largely without power.

The massive blackout in the oil-rich but economically troubled South American nation has intensified the political standoff between Guaido, who is recognised as Venezuela’s leader by more than 50 countries, and Maduro, who is clinging to power.

No national data was available about the impact of the power outage, but an NGO said at least 15 patients with advanced kidney disease died after they stopped receiving dialysis treatments in darkened hospitals.

In Washington, National Security Advisor John Bolton suggested members of the Venezuelan military were reconsidering their support for Maduro.

“There are countless conversations going on between members of the National Assembly and members of the military in Venezuela, talking about what might come, how they might move to support the opposition,” Bolton said in an interview on ABC’s “This Week.” He said one reason the security forces have refrained from arresting Guaido “is Maduro fears if he gave that order, it would not be obeyed.”

Asked if he was certain Maduro was on his way out, Bolton said, “I’m not certain of anything, but I do think Guaido has the momentum.”

The military’s high command has repeatedly declared absolute loyalty to Maduro, but desertions of enlisted soldiers and lower-ranking officers have been on the rise.

As night fell Saturday, much of the country was still without power. Businesses remained shut, hospitals struggled to operate, and public transport barely functioned.

The 35-year-old Guaido, the head of Venezuela’s National Assembly, earlier told thousands of supporters that he would soon embark on a nationwide listening tour before leading a march on the capital.

“Once we’ve finished the tour, organizing in every state, we’ll announce the date when all together we’ll come to Caracas,” Guaido said, using a megaphone as he stood on the roof of a pickup truck.

Guaido, who proclaimed himself president of the country of 30 million people in January and says Maduro’s May re-election was illegitimate − has demanded new polls.

He threatened to call for an outside military intervention “when the time comes,” pointing to the constitution, which authorizes “the use of a Venezuelan military mission abroad, or foreigners inside the country.”

“All options are on the table,” he said, borrowing a phrase from US President Donald Trump.

Maduro also rallied his supporters. Wearing red, they protested against “imperialism” at a march that marked four years since the United States branded Venezuela a “threat” to its security and imposed sanctions.

“Today, more than ever, we’re anti-imperialists. We will never surrender!” Maduro wrote on Twitter.

He said that almost 70 per cent of power had been restored by mid-day, when a “cyberattack” was reported at a major power plant.

“That disturbed and undid everything we had achieved,” he said.

Both the pro-Guaido and the pro-Maduro rallies ended without major incident.

The blackout has been one of the worst and longest in recent memory in Venezuela, which is already suffering from serious shortages of food and medicine due to the overarching economic crisis.

Problems have been exacerbated by hyperinflation that the International Monetary Fund says will reach 10 million per cent this year.

An estimated 2.7 million people have left the country since 2015.

“This has been horrible,” said Sol Dos Santos, a 22-year-old, whose daughter is hospitalised.

“Everything is dark. Only some areas with generators are working.”

“Every day is worse,” said Edward Cazano, a 20-year-old who lives with his mother and three brothers in a poor Caracas neighborhood called Pinto Salinas.