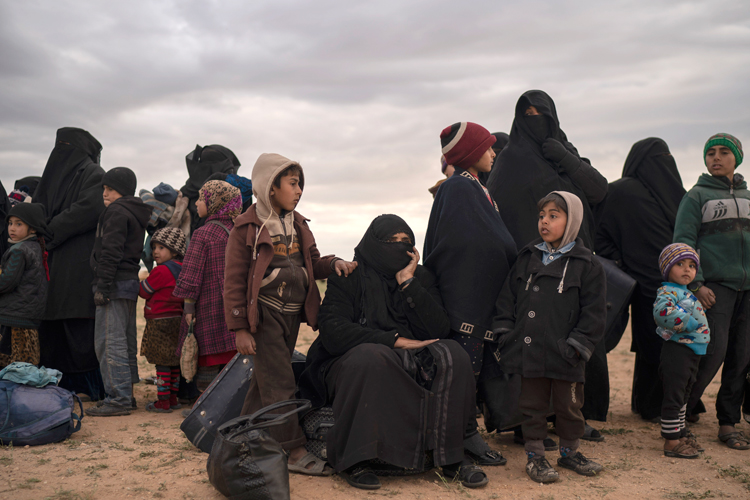 BAGHOUZ (Syria): Hundreds of people boarded trucks leaving the last scrap of the Daesh group's "caliphate" in eastern Syria on Wednesday as US-backed forces prepared to deliver the final blow to holdout militants.

Several thousand people -- fighters and their relatives -- are believed to be cornered in the last pocket of Daesh-held territory, barely half a square kilometre near the Iraqi border.

Nearly five years since Daesh leader Abu Bakr Al Baghdadi ascended a pulpit in a Mosul mosque to urge Muslims to join the newly proclaimed "caliphate", the proto-state -- only days away from dying in a tiny village that until recently few even in Syria had ever heard of. 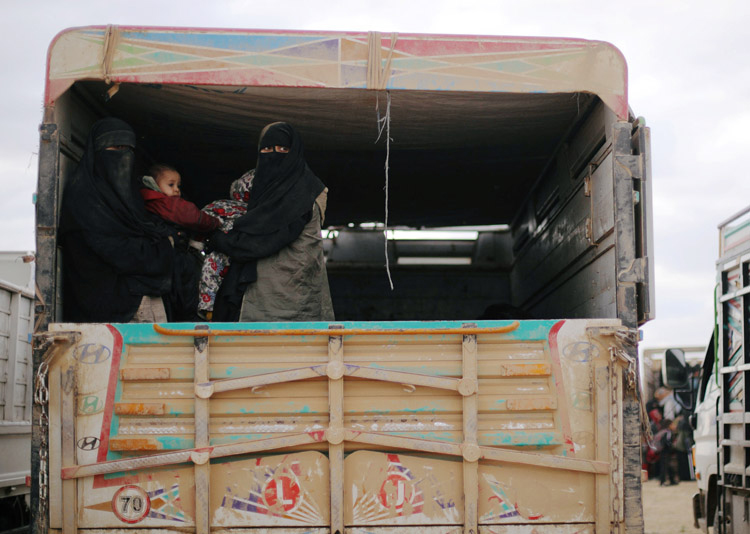 Women stand at a back of a truck near the village of Baghouz, Deir Al Zor province, Syria, on Wednesday. Rodi Said / Reuters

Thousands of its last denizens, many of them women and children, have been pouring out of the riverside hamlet of Baghouz in recent days, posing a huge humanitarian challenge for the Kurdish fighters leading the operation.

On Wednesday alone, 15 trucks rumbled out of Baghouz, the fifth such evacuation in a week.

After being screened, the evacuees are sent on to the Al-Hol camp further north.

The International Rescue Committee said that "the large numbers of arrivals mean there are estimated to be around 2,000 people currently sleeping rough at the arrivals area despite the poor weather conditions."

Survivors of the months-old siege who spill out of the double-trailer trucks tell harrowing tales of starvation. Many need immediate medical attention.

Lines of black-veiled women holding scruffy children and carrying their scant belongings in bags can be seen walking down from a hill near Baghouz and across the arid plain.

Save the Children said many of the surviving children have witnessed horrifying events in recent months and are "showing signs of psychological distress".

An AFP reporter saw that the latest trucks to leave were not as full as in previous days.

It was not clear how far this was because fewer people are trapped in the Daesh-held pocket or because those who remain either cannot leave or want to stay and fight.

The men who leave are carefully screened by the Kurdish-led Syrian Democratic Forces (SDF), who have spearheaded the battle against Daesh in Syria, with support from a US-led coalition.

Suleiman Mohammad Terbu, a Syrian who walked on crutches because of an injury, said he had been a teacher at an Daesh-run school.

The militant group ran schools throughout the territories it controlled, indoctrinating boys into its ideology, but Terbu insisted he only taught the Quran, maths and sport.

"My family were smuggled out before me, but I couldn't do that because (IS fighters) don't let anyone leave," he said.

The remaining diehard militants -- many of them foreigners -- have also been using civilians as human shields.

Footage captured by the BBC from positions held by Iraqi paramilitary forces across the Euphrates river shows an improvised camp where an apparent militant can be seen running among makeshift tents.

As warplanes fly overhead, a woman -- seen collecting water from the river in a plastic jerrycan while men move stealthily among the jumble of minivans and civilian shelters that make any direct air strike impossible.

The SDF launched its final offensive against Daesh-held territory in September 2018.

The operation has been deadly and slow, and one top French officer even published stinging criticism of the coalition's reluctance to fully involve its ground forces.

A security vacuum could also see a quick resurgence of Daesh, which has lost all its strongholds in Syria and Iraq but remains a potent guerrilla force.

Even the US military warned that the militants could potentially re-establish territorial control in some areas within six months if there were no "sustained counterterrorism pressure".

Almost eight years into a multi faceted conflict that has killed more than 360,000 people, Syria's humanitarian emergency shows no sign of relenting.

With aid agencies struggling to provide basic relief to famished civilians evacuated from the remote Baghouz area, Save the Children highlighted the trauma the youngest among them had suffered.

The children who fled Daesh-held areas were "likely to have witnessed acts of brutality and lived under intense bombardment and deprivation", it said.

In a statement, it quoted an 11-year-old saying: "I always tried not to look when there were beheadings. I would hide behind my mum."

It called for much greater efforts to help the children.

"That includes funding and access for case management and protective services, and for foreign children repatriation to their countries of origin," said Save the Children's Syria response director, Sonia Khush.

The local Kurdish administration Daesh struggling to cope with the humanitarian burden and has repeatedly urged the world to step up its aid effort.

Detained militants' countries of origin are reluctant to repatriate them, fearing a public backlash and security threats.