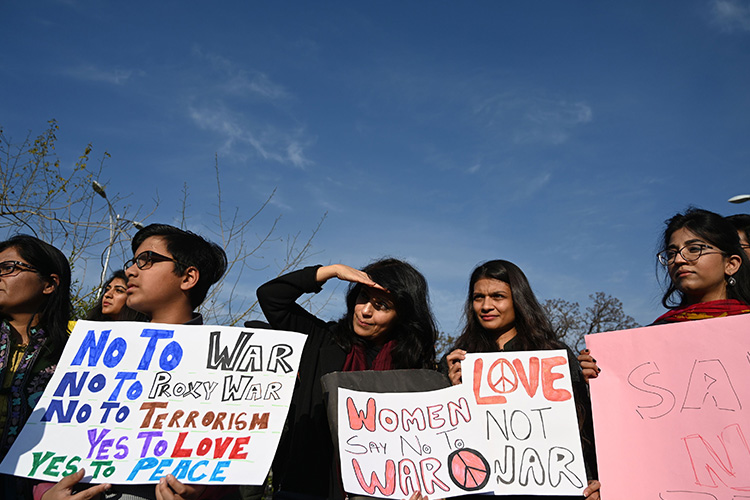 ISLAMABAD: Pakistan's prime minister pledged on Thursday his country would release a captured Indian jetfighter pilot the following day, a move that could help defuse the most-serious confrontation in two decades between the nuclear-armed neighbours over the disputed region of Kashmir.

Prime Minister Imran Khan made the announcement in an address to both houses of Parliament, saying he tried to reach his Indian counterpart Narendra Modi on Wednesday with a message that he wants to de-escalate tensions.

"We are releasing the Indian pilot as a goodwill gesture tomorrow," Khan told lawmakers. He did not say whether the release was conditional.

Indian students pray for a speedy release of Abhinandan Varthaman in a school in Ahmedabad. Photographer: Sam Panthaky/ AFP

An Indian government official, speaking on condition of anonymity as he was not authorised to speak publicly, warned that even if the pilot is returned home, New Delhi would not hesitate to strike its neighbour first if it feared a similar militant attack was looming.

Modi earlier in the day warned that "India's enemies are conspiring to create instability in the country through terror attacks."

Khan also said that he had feared Wednesday night that India might launch a missile attack, but the situation was later defused. He did not elaborate.

"Pakistan wants peace, but it should not be treated as our weakness," Khan said.

"The region will prosper if there is peace and stability. It is good for both sides."

Meanwhile, fresh skirmishes erupted Thursday between Indian and Pakistani soldiers along the so-called Line of Control that divides disputed Kashmir between the two nuclear-armed rivals.

He said Indian soldiers were responding to ongoing Pakistani attacks along the highly militarised de-facto frontier.

"Pakistan wants peace, but it should not be treated as our weakness

World powers have called on the nations to de-escalate the tensions gripping the contested region since a Feb.14 suicide bombing killed over 40 Indian paramilitary troops in Indian-controlled Kashmir.

India responded with a pre-dawn airstrike on Tuesday inside Pakistan, the first such raid since the two nations' 1971 war over territory that later became Bangladesh.

The situation then escalated further with Wednesday's aerial skirmish, which saw Pakistan say it shot down two Indian aircraft, one of which crashed in Pakistan-held part of Kashmir and the other in India-controlled Kashmir. Pakistan later aired a video of a man it identified as the Indian pilot.

India acknowledged one of its MiG-21s, a Soviet-era fighter jet, was "lost" in skirmishes with Pakistan.

India's Ministry of External Affairs said late Wednesday that it "strongly objected to Pakistan's vulgar display of an injured personnel of the Indian Air Force," and that it expects his immediate and safe return.

India also said it shot down a Pakistani warplane, something Islamabad denied.

Both Indian and Pakistani officials reported small-arms fire and shelling along the Kashmir region into Thursday morning. There were no reported casualties.

Authorities in Pakistani-controlled Kashmir closed all schools and educational institutions in the region and are urged parents to keep their children at home amid mounting tension with neighbouring India.

Pakistan's Foreign Ministry spokesman Mohammad Faisal acknowledged his country received a "dossier" from India about the Feb.14 attack. He refused to provide details about the information that New Delhi has shared.

World leaders weighing in on the tension included President Donald Trump, who began remarks at a news conference on Thursday in Vietnam after meeting North Korean leader Kim Jong Un by focusing on India and Pakistan.

"I think hopefully that's going to be coming to an end," Trump said, without elaborating.

"It's been going on for a long time - decades and decades. There's a lot of dislike, unfortunately, so we've been in the middle trying to help them both out, see if we can get some organization and some peace, and I think probably that's going to be happening."

Modi, in his first remarks since the pilot's capture, gave a rallying speech ahead of elections in the coming months.

"Our defense forces are serving gallantly at the border," he told tens of thousands gathered across the country to listen to him in a videoconference from New Delhi.

"The country is facing challenging times and it will fight, live, work and win unitedly."

Just weeks before general elections are due in India, the head of Modi's party in India's Karnataka state, BS Yeddyurappa, said India's pre-dawn airstrikes in Pakistan on Tuesday would help the party at the polls.