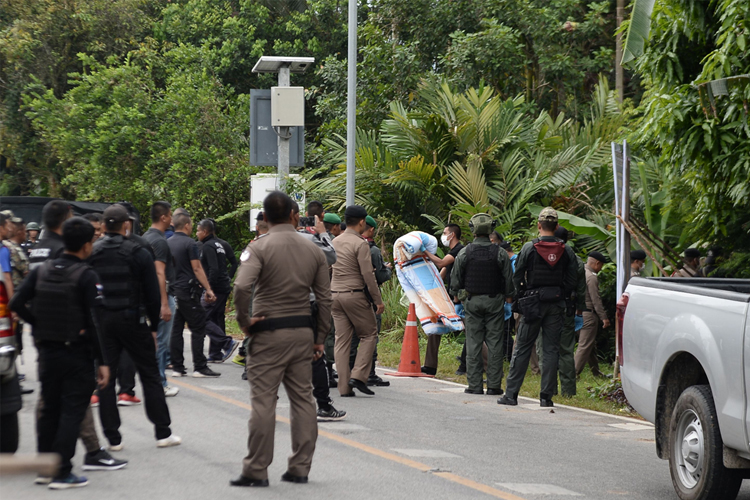 Police secure the area as authorities recover the bodies of a Buddhist and a Muslim policemen in the restive southern Thailand province of Narathiwat on February 27, 2019. Two Thai policemen were executed after being abducted from a tea shop in the kingdom's violent southern borderlands, police said on Wednesday, as bloodshed again spikes in a 15-year insurgency. Madaree Tohlala / Agence France-Presse

BANGKOK: Two Thai policemen were executed after being abducted from a tea shop in the kingdom’s violent southern borderlands, police said on Wednesday, as bloodshed again spikes in a 15-year insurgency.

Clashes between ethnic Malay-Muslim rebels and the forces from the Buddhist-majority Thai state which annexed the region a century ago have killed nearly 7,000 people since 2004, mostly civilians.

The death toll dropped to a record low last year as Thailand’s junta tightened its security web and militant attacks on civilians have become less frequent.

“The kidnappers abducted the two policemen, took their guns and forced them to get into a pick-up truck,” Sarayuth said.

The bodies were found later a few hundred metres away. One of the victims was Buddhist while the other was Muslim, he said.

The wife of the Muslim policeman wept inconsolably as she arrived Wednesday at the hospital where the bodies were taken.

The killings occurred several hours after a bomb exploded in neighbouring Yala province, killing a Thai ranger on patrol.

Authorities said the attacks were likely retaliation after authorities launched raids in nearby mountains to pursue those responsible for recent assaults on soft targets.

Security forces injured a boy as they gunned down rebels in counter-operations.

Claims of responsibility are rare in a conflict where the militants melt into remote communities or cross the porous border into Malaysia.

Peace talks have gone nowhere with the Barisan Revolusi Nasional (BRN), who command the majority of rebel foot soldiers refusing to join discussions with the Thai side.

Thailand remains unwilling to cede ground in public on demands for greater autonomy or allow international observers to mediate talks.

In a rare public statement on Jan.4 the BRN vowed to “keep fighting.”