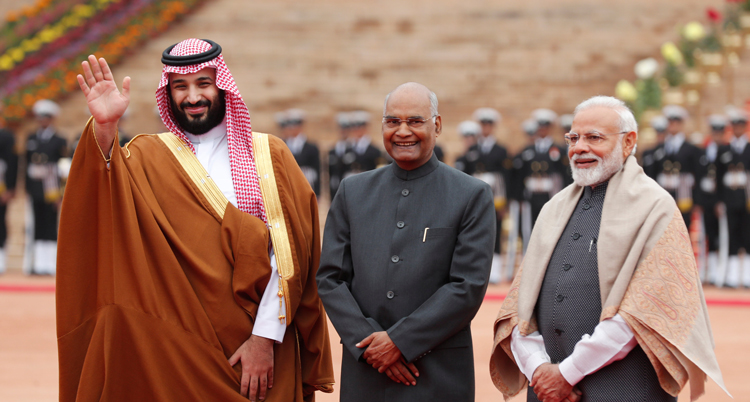 NEW DELHI: Saudi Crown Prince Mohammed Bin Salman on Wednesday said his visit to India will improve centuries-old ties, which he said are “in our DNA.”

In brief remarks at the president’s palace where he was given a ceremonial welcome, the crown prince did not make any reference to rising tensions between India and Pakistan.

He arrived in India on Tuesday night after visiting Pakistan.

Prince Mohammed is due to hold talks with India’s Prime Minister Narendra Modi and the two sides are expected to sign agreements for promoting investment, tourism, housing and communications.

The crown prince said on Wednesday that “since we remember ourselves, we know Indian people as friends, and they are part of building Saudi Arabia in the past 70 years.”

These relations would improve for the sake of both countries, he told reporters.

India describes Saudi Arabia as a “key pillar” of its energy security. It provides about 17 per cent of India’s crude oil and about a third of its liquefied natural gas.

The relationship is likely to become more significant as a deadline nears for India to comply with US sanctions against Iran, one of India’s main oil providers.

Ties between India and Saudi Arabia, where millions of Indians are employed as migrant workers, have strengthened since Modi visited Riyadh in 2016 for the signing of a memorandum of understanding on cooperation with intelligence-gathering on money laundering and terrorism financing.