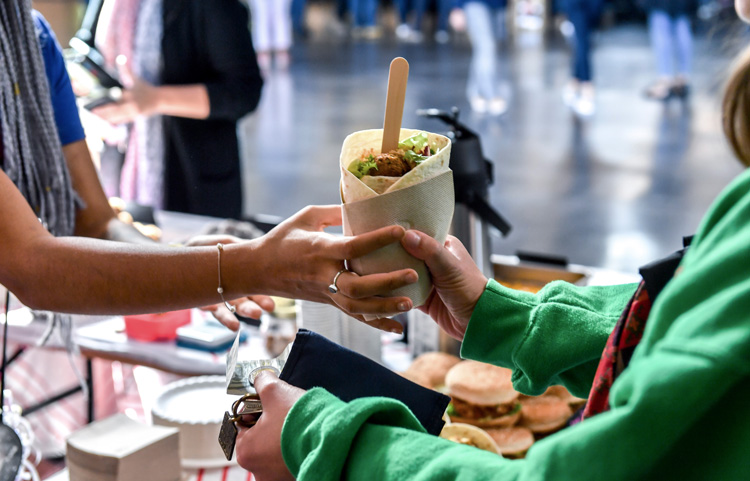 A person serves a vegan wrap at a food stall in Calais. Philippe Huguen / AFP

LONDON: A woman who called a major bank to apply for a loan was told “all vegans should be punched in the face”.

The customer, who does not want to be named, contacted NatWest to ask for a £500 loan for a course so she could become a vegan nutrition consultant.

But she was left feeling “really uncomfortable” after the man on the other end of the phone launched into a tirade about vegans.

When the woman asked what he meant by the comment, the NatWest worker is said to have explained vegan activists had drawn pictures of animals and written messages such as “friends not food” in chalk on pavements near where he lived.

She said he added that “vegans were forcing their beliefs on to him”.

“When you’re calling up a really big organisation like NatWest you just don’t expect that kind of response,” she told BBC Radio Bristol on Monday.

“He wasn’t happy to be speaking to me at all; his tone was really unpleasant.”

The Bristol woman said veganism was really important to her family as they decided to become vegan after her daughter had to see a cancer specialist.

“Being vegan is a lifestyle choice,” she added. “I shouldn’t be penalised for it especially by a big organisation. It’s really unfair.”

The woman complained to NatWest, which found a recording of the phone conversation from 23 January and said it did not dispute the customer’s version of events.

The bank apologised and offered the woman £185.50 in compensation and to cover the £400 cost of the course.

“We are extremely sorry for the way our customer was treated by a member of our staff and apologise for any distress and upset this behaviour has caused,” NatWest said in a statement.

“These comments were wholly inappropriate and we have commenced disciplinary proceedings.