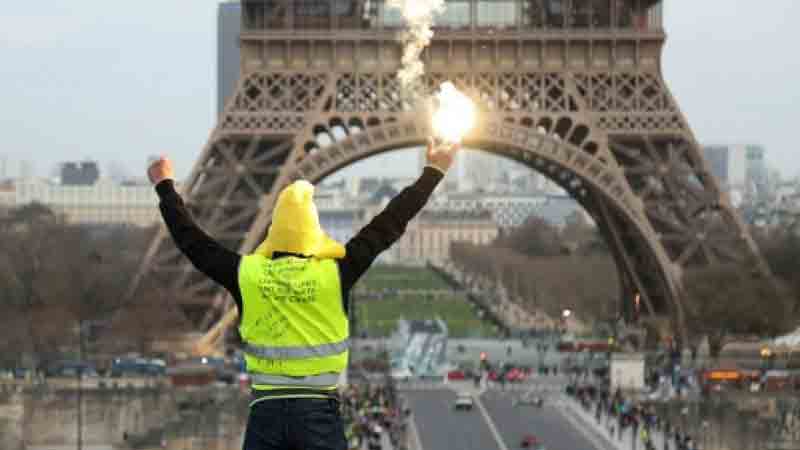 PARIS: Demonstrators are to hit French city streets again on Saturday, marking three months of “yellow vest” protests as a poll now suggests that most of the country wants them to stop.

The number of those attending the weekly rallies has dropped since 287,000 turned out on Nov.17, the first Saturday of protest.

And for the first time, a poll found on Wednesday that more than half those questioned felt it was time to end the protests.

On Feb.9, the 13th weekend of anti-government actions, 51,000 people took to the streets according to police, though protest organisers put the figure at 118,000.

In Paris, where 4,000 gathered last week, clashes broke out outside the National Assembly building where one demonstrator lost a hand, reportedly as he tried to bat away a stun grenade.

Masked activists tried to break down barriers protecting the parliament but were repelled by police firing tear gas and grenades.

As the march continued, vandals burned rubbish bins and cars and smashed bus shelters, cash machines and shop windows along the route.

One of the torched vehicles belonged to Sentinelle, an anti-terrorism unit. Interior Minister Christophe Castaner expressed his “indignation and disgust” in a tweet.

Some 550 shops have been damaged by protesters in the capital since mid November.

Thousands of protesters also turned out in the southern cities of Marseille, Montpellier, Bordeaux and Toulouse — strongholds of the movement — as well as several cities in the north and west of France.

The “yellow vest” movement started as a protest against rising fuel taxes, but it has become one of opposition to President Emmanuel Macron’s policies.

Speaking at a meeting with local mayors on Thursday, Macron said it was time for a “return to reason”, adding that authorities would act with “greater firmness” against violent demonstrators.

The interior ministry said 1,796 people have been sentenced for rioting or other acts of violence over the past three months, while 1,422 more are awaiting trial.

Ex-boxer Christophe Dettinger who became a hero to some protesters after beating up police officers during a demonstration in January was convicted on Wednesday and given a one-year prison term.

56 per cent want protests to stop

An Elabe opinion poll published on Wednesday said 56 per cent of French people now wanted the protests to stop — 11 points higher than a month ago.

And while 58 per cent of people still backed or had sympathy for the protesters, that was five points lower than two weeks ago and nine points below the level in early January.

Two out of three people thought the recurring Saturday rallies were no longer in keeping with what “yellow vests” originally stood for.

Macron has pledged 10 billion euros ($11.2 billion) in response to anger over the high cost of living, including tax cuts for some pensioners and measures to boost low wages.

He has also spearheaded a “grand national debate” by way of the internet and town hall meetings to gather opinions on how the country could be reformed.

It was not known how many people might turn out for protests over the weekend as social media messaging has alternatively called for blocking the Arc de Triomphe monument in Paris Saturday, or marching down the Champs-Elysees avenue on Sunday.

Others suggested “yellow vests” should return to their original tactics of massing at roundabouts nationwide and blocking traffic.