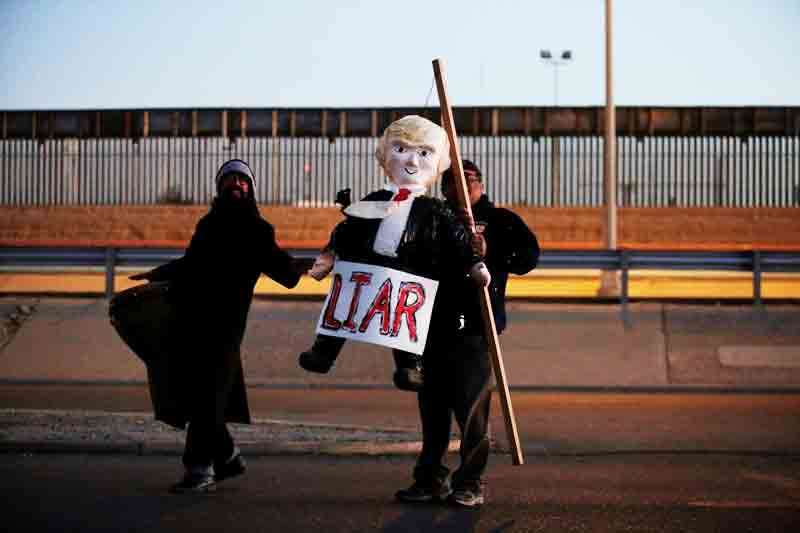 WASHINGTON: US House and Senate legislators have reached an agreement “in principle” to provide $1.375 billion for barriers at the Mexico border, a figure far lower than the $5.7 billion that President Donald Trump had demanded, to avert another government shutdown.

The deal however, still needs to pass the House and Senate and secure Trump’s signature, reports The New York Times.

The framework would allow for 55 miles of new bollard fencing, with some restrictions on location based on community and environmental concerns, according to Congressional aides.

The negotiators announced they had reached the agreement after three private meetings on Monday.

It is expected to be finalised as early as Tuesday, well before the Friday deadline when funding would again lapse for a number of federal agencies.

“The fact that it looked like there was going to be another shutdown imminently brought renewed efforts on Monday,” The Washington Post quoted Senate Appropriations Committee Chairman Richard C. Shelby as saying after announcing the deal.

Asked if the White House would support the agreement, Shelby, a Republican from Alabama, told the media: “We think so. We hope so.”

House Appropriations Committee Chairman Nita M. Lowey, who was in Monday’s meetings, said she hoped the negotiators would have a finished product by Wednesday.

The California Democrat said she ran the proposal by House Speaker Nancy Pelosi and she signed off on it.

“Some may be happy, some may not be happy,” said Lowey, assessing how Democrats would receive the deal and saying she hoped the agreement would have the votes needed to pass the House. “We did the best we could.”

Besides Shleby and Lowey, Vermont Democrat Patrick J. Leahy and Texas Republican Kay Granger participated in the Monday meetings. They are part of a bi­partisan conference committee charged with striking a border security deal.

The White House and congressional leaders have struggled for months to reach an agreement on a government funding bill because of major differences between Democrats and Republicans over immigration policy.

Trump called for using $5.7 billion in taxpayer money to construct more than 200 miles of a wall along the US-Mexico border.

Democrats objected to this and Trump forced the first partial government shutdown to try to exert pressure on Congress to act.

The White House and Republicans eventually backed down, agreeing to a short-term spending bill for a number of agencies that was meant to give congressional negotiators more time to reach a longer-term deal.

Asked by the media if the government would shut down again for the second time, he responded: “That’s up to the Democrats.”

Meanwhile, Trump has readied a plan to declare a national emergency on the southern border, which he believes will allow him to redirect taxpayer money from other projects to build parts of a wall - without approval from Congress.