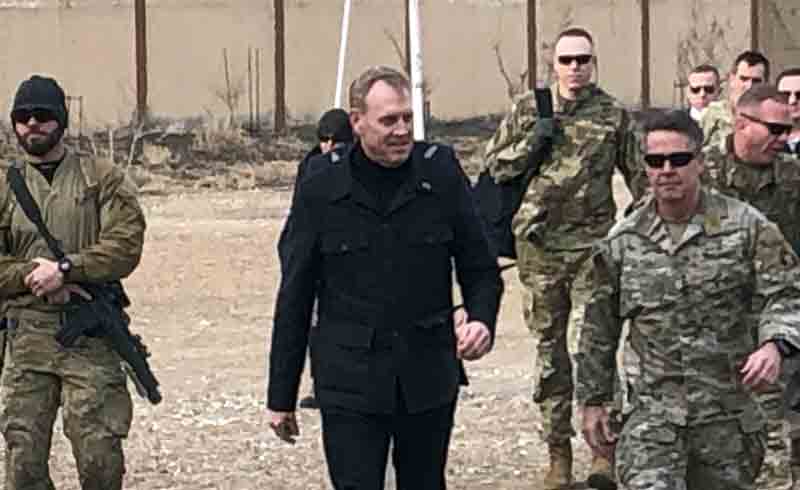 KABUL: Acting Pentagon chief Patrick Shanahan arrived in Afghanistan on a surprise visit on Monday as the United States seeks to support the Kabul government while negotiating peace with the Taliban.

Shanahan will meet President Ashraf Ghani, whose government was not part of major talks between US and Taliban officials last month that negotiators hope could bring a breakthrough in the grinding 17-year conflict.

The US diplomat leading the talks has expressed hope at finding a deal before Afghan presidential elections scheduled for July, as President Donald Trump calls for an end to American military involvement in the war-torn country.

Ghani’s allies in Washington insist Afghans should lead the peace process, but the Taliban consider the Kabul administration a US puppet and refused to talk to them.

Shanahan reinforced US support for the Kabul government before touching down in the Afghan capital.

“It’s important that the Afghan government is involved in discussions regarding Afghanistan,” Shanahan told reporters on the flight.

“The Afghans have to decide what Afghanistan looks like in the future. It’s not about the US, it’s about Afghanistan.”

The months-long push by the US to engage the Taliban has ostensibly been aimed at convincing them to negotiate with Kabul.

The insurgents have refused to meet Ghani government officials.

But last week they held unprecedented talks in Moscow with a high-ranking delegation of Afghan politicians— including chief Ghani rivals — to discuss their role in the country’s future and a possible path towards peace.

Trump has been pushing to end US involvement in Afghanistan, where 14,000 American troops are still deployed.

But Zalmay Khalilzad, a former ambassador to Afghanistan who has spoken extensively with the Taliban in recent weeks, emphasised that any troop withdrawal would depend on conditions on the ground.

US and NATO officials have denied that a deal has been struck on America withdrawing its troops. The Taliban, speaking in Moscow last week, also said that a timeline had not been agreed upon.

Shanahan will meet General Scott Miller, the top US and NATO commander in Afghanistan, during his visit.

“I have not been directed to step down our forces in Afghanistan,” Shanahan said.

“I think the presence we want in Afghanistan is what assures our homeland defence and supports regional stability.”

The US is expected to resume talks with Taliban officials in Doha, where the insurgents have their political office, on Feb.25.