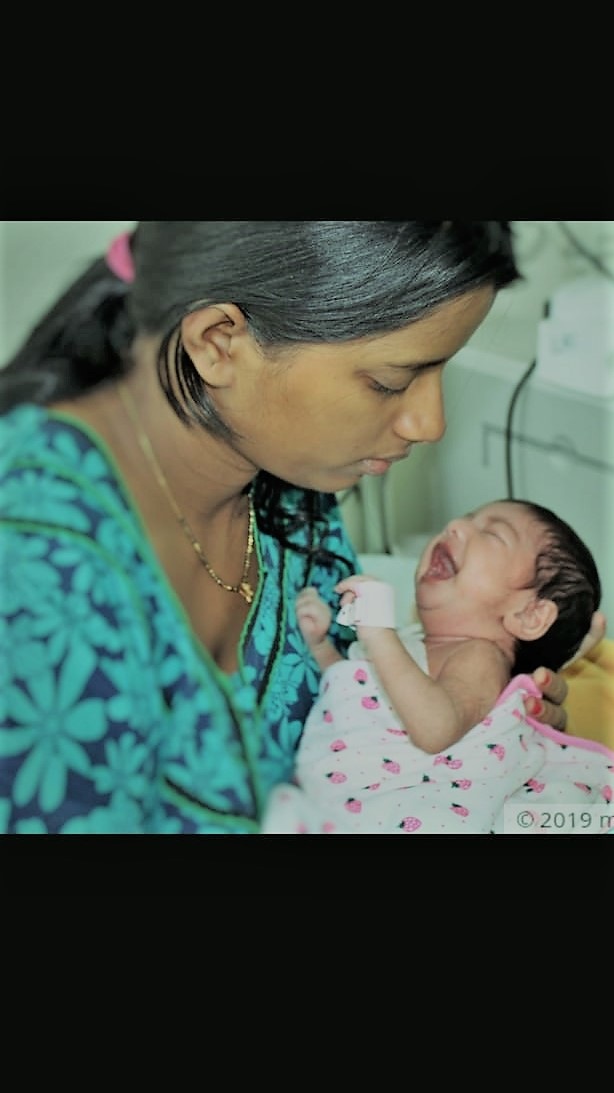 The baby's condition is now normal

Dubai: Aster DM Healthcare, a leading integrated healthcare services provider in the GCC and an emerging player in India, fulfilled yet another commitment to saving lives using the latest technologies in medical treatment, this time through its unit Aster CMI Hospital in Bangalore, India.

A less than a month old newborn, who had been infected by a superbug recently, was miraculously saved by the combined effort of the doctors at Aster CMI Hospital and active intervention by a Good Samaritan. Baby girl Rekha (name changed), born in a small town of Jharkhand, was suffering from a rare life-threatening infection of the skin called Necrotising Fasciitis, also known as flesh eating disease with a high mortality rate. Team effort and multi-disciplinary management by Dr Sudheer KA, consultant neonatologist, Dr Madhusudan G, lead consultant plastic surgeon, Dr Chetan Ginigeri, consultant PICU and Dr Shilpa V, senior specialist at department of paediatrics ensured the child’s recovery and survival. The baby will now be able to lead a normal life, thanks to the effectiveness of the medical procedures deployed in treatment.

Within five days of her birth, Rekha was noticed to have pus filled vesicles on skin over the right chest wall. Although she was administered with injectable antibiotics at a hospital in Jharkhand, the child’s condition continued to worsen with superficial infection eating away her skin and muscles underneath. The infection spilled into her bloodstream causing high grade fever, poor feeding and respiratory distress, making her vulnerable to death and leaving the parents helpless. Owing to continuous degradation in the child’s condition, she was required to be referred for further management.  This is when a close family friend reached out to the paediatric team of Aster CMI to see if the doctors could help the child. He even agreed to foot the bill of the family’s travel as they lacked financial resources. The doctors at the hospital came to her rescue. Immediately, the child was flown to Bangalore, and was taken from the airport by the Aster paediatric team.

The case involved necrotising fasciitis of the right antero-lateral chest wall following neonatal pustulosis, a group of disorders characterised by various forms of highly inflammatory skin condition resulting in large fluid-filled blister like areas seen in first four weeks of life. The child had an innocuous looking superficial skin infection manifesting as small pus-filled boils which then eroded into the skin and underlying fascia and muscle to cause local destruction of tissues. The bug commonly known as MRSA – Methicillin resistant Staphylococcus Aureus – is a very potent bacteria which can cause life-threatening infection. The child was managed with appropriate antibiotics, wound debridement with vacuum assisted closure (VAC) and skin grafting.

Dr Sudheer K A, Consultant Neonatologist, Aster CMI Bangalore, said: “After the initial assessment, we realised that the child was in a complicated condition. She was severely septic and the chest was being rapidly eaten away leaving a gaping defect over the skin which would definitely leave a scar. We had to quickly address three issues – control blood stream infection, debride and remove dead skin and flesh thereby controlling the source, and optimise wound care so that the baby girl did not have a gaping defect and scar over her chest wall.”

The child was given appropriate antibiotics after culture reports revealed the presence of Methicillin-resistant Staphylococcus (MRSA) – a superbug which can cause life-threatening infection. Dr Madhusudan G, Lead Consultant Plastic Surgeon at Aster CMI said, “We adopted a unique method of debridement followed by Vacuum Assisted Closure (VAC) for wound care. VAC dressing is an evolving mode of treatment in newborns for necrotising fasciitis and other major wounds including post cardiac and abdominal surgical wounds. It has been proven to be safe in neonates with birth weight as low as 650 grammes. Vacuum assisted dressing over the wound bed allows the arterioles to dilate, increasing the effectiveness of local circulation, promoting angiogenesis, which assists in the proliferation of granulation tissue and enhancing wound healing. Patients on VAC were seen to have early granulation and rapid wound healing compared to saline gauze dressing”.

After 14 days of IV antibiotics and negative pressure treatment, the baby was taken up for split skin grafting on the 26th day of her life (graft site: right thigh). She was monitored in the Paediatric Intensive Care Unit (PICU) for 24 hours post operatively and was then shifted to her mother’s side.

“Following the surgery, we advised the parents to moisturise the wound site twice daily with cream and gentle massaging of the same for the next four to six months. The girl will go on to live a normal life with minimal or no scaring to show for the turbulence she went through,” added Dr Shilpa V, Senior specialist, Department of Paediatrics, Aster CMI hospital.

Dr Chetan Ginigeri, Consultant PICU, Aster CMI Hospital said: “As her parents were from financially less privileged background, we made use of crowd funding platform  to raise Rs7 lakh for this complex procedure and overall care. Left to themselves, the family would have continued treatment locally and the child would have succumbed to the deadly infection. The initiative by a friend, doctors and hospitals taking the ownership of medical, social and financial care made the treatment successful.”