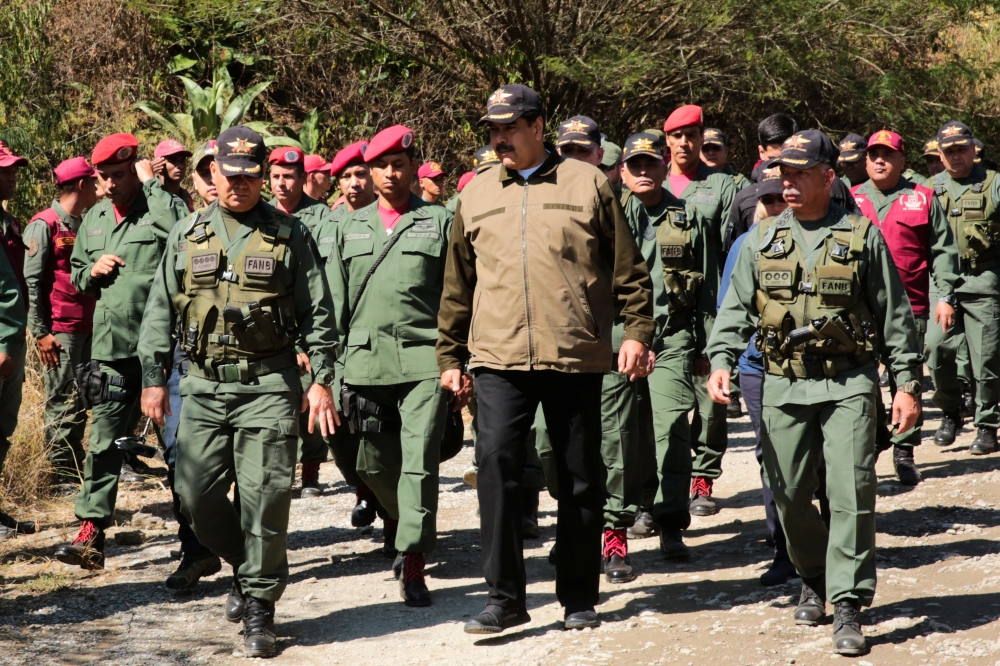 CARACAS: Tens of thousands of protesters were set to pour onto the streets of Caracas on Saturday to back opposition leader Juan Guaido's calls for early elections as international pressure increased on President Nicolas Maduro to step down.

Major European countries have set a Sunday deadline for Maduro to call snap presidential elections. Failing that, they will join the United States in recognizing National Assembly speaker Guaido as Venezuela's interim president.

"Maduro's tyranny must end and must end now," US Vice President Mike Pence told a rally of exiled Venezuelans in Miami on the eve of the protest.

Guaido's call for a massive show of popular support coincides with a huge pro-Maduro demonstration.

The ruling Socialist party celebrates the 20th anniversary of the rise to power of Hugo Chavez, Maduro's deceased predecessor, on Saturday.

The "clear goal" of the march was "to accompany the ultimatum given by members of the European Union," Guaido said ahead of the march, which will begin outside the EU offices in eastern Caracas.

"We are going to stage the biggest march in the history of Venezuela and our continent," he added.

The rival marches will take place in different districts of a tense Venezuelan capital. Maduro's supporters will concentrate in Plaza Bolivar in the heart of Caracas, 10 kilometers (six miles) from the EU offices.

Clashes last week around the country left some 40 people dead, according to the United Nations.

Chavez, the army officer whose oil-fueled spending raised millions of Venezuelans out of poverty, assumed office as Venezuela's president February 2, 1999 at the head of a socialist movement.

His hand-picked successor, Maduro, has presided over the oil-rich country's economic collapse and is widely denounced as a dictator for ruthlessly cracking down on dissent amid chronic shortages of food and medicines.

Guaido, 35, is trying to force the socialist leader from power so he can set up a transitional government and hold new presidential elections.

The United States and a dozen Latin American countries rapidly recognized Guaido after he declared himself acting president in a January 23 speech, posing a direct challenge to Maduro's authority.

European Parliament lawmakers recognized Guaido on Thursday as the acting head of state.

And four major European powers − Britain, France, Germany and Spain − have said they will do so if Maduro fails to call presidential elections by midnight on Sunday.

The international heave against Maduro's leftist regime came after weeks of behind-the-scenes diplomacy including secret talks in Washington between Guaido and US officials.

"Nicolas Maduro will do well not to test the resolve of the United States of America," Pence warned on Friday.

- 'Time for action' - "Let me be very clear: this is no time for dialogue. This is time for action," the vice president said. "The time has come to end Maduro's dictatorship once and for all." In a letter to the presidents of Mexico and Uruguay published Friday, Guaido ruled out any negotiations with Maduro unless they "start the transition process, culminating in the holding of free elections." Mexico's Andres Manuel Lopez Obrador and Uruguay's Tabare Vazquez have jointly called a conference in Montevideo next Thursday for "neutral" countries to discuss the crisis.

Previous negotiations all had the same "unsatisfactory result," Guaido wrote.

"The dictatorship of Nicolas Maduro has not changed its position. They have mocked the Venezuelan people to their face." The last 10 days of political upheaval have exacerbated economic meltdown in Venezuela, which has the world's largest proven oil reserves but has suffered hyperinflation and shortages of basic necessities.

The UN says 2.3 million people have fled the country, unleashing a migration crisis in South America.

Guaido has acknowledged "clandestine meetings" with members of the armed forces and security forces, who he is trying to woo with an amnesty offer.

So far, the military high command has remained loyal to Maduro.