Waterfalls are roaring this spring in Yosemite National Park - GulfToday

Waterfalls are roaring this spring in Yosemite National Park 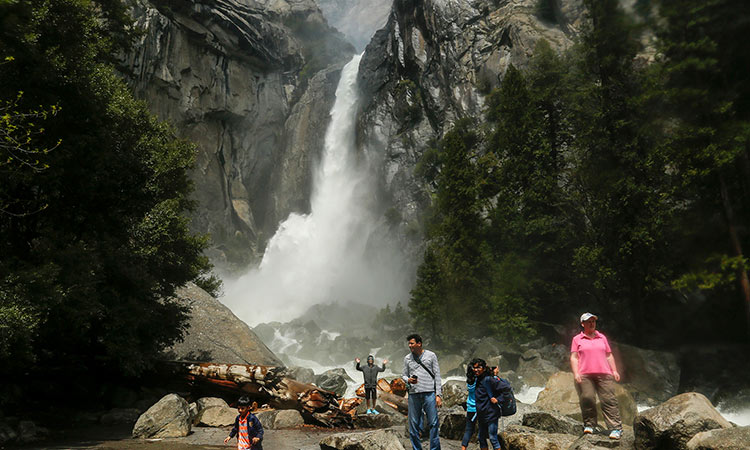 Visitors stand in a mist cloud while they snap pictures of the gushing Lower Yosemite Fall in the Yosemite Valley. TNS

There’s no finer place in California to view waterfalls than Yosemite Valley. And there’s no better time than now.

Roaring like thunder, the world-famous falls are likely to grow even wilder after this month’s storms, adding more water to the Merced River already swollen to twice its average size, according to U.S. Geological Survey gauges.

As days lengthen, temperatures climb and new rain accelerates the melting of this winter’s deep snow, “this is the best time of year,” he said.

This unusually wet May weather could continue until the end of the month, adding new precipitation to a soggy snowpack and saturated soil.

Of course, no one wants a repeat of the April 2018 flooding, when an unusual springtime atmospheric river delivered up to 6 inches of rain — spawning hundreds of spontaneous waterfalls, inundating the valley floor with 2 to 4 feet of water and damaging roads, campsites and electrical infrastructure.

A bountiful winter made the difference this year. As of May 1, the snowpack was between 149% and 160% of average in the Tuolumne and Merced River watersheds that originate along Yosemite’s rugged crest of the Sierra Nevada.

Dip your hands into their cold and wild creeks. Climb to the top of waterfalls, then feel head-spinning vertigo as you watch the water plunge down vertical granite walls. In the list of the world’s 20 tallest waterfalls, Yosemite Valley scores three spots: Yosemite Falls, Sentinel Fall and Ribbon Fall.

His second choice: The Cascades, less well known, which start off as a series of smaller tumblers through dense forest in the Tamarack Creek of western Yosemite, then plunge 500 feet into the Merced River.

“Ribbon Falls is a beautiful strand,” agreed Schuyler Greenleaf, project director of Yosemite Conservancy. “It falls into this very sweet, small amphitheater, with all this gold granite on one side. You have to get up there in the spring or you miss it.”

Her other favorite: Bridalveil Fall, famous for its drenching mist and light, swaying flow when the wind blows.

Nevada Fall is the most treasured waterfall for park spokesman Gediman. “It’s elegant, in this special setting, next to Liberty Cap,” a giant granite dome, he said.

He’s also fond of Sentinel Fall, “because it follows the contour of Sentinel Rock. It makes a statement, telling the story of snow melting into creeks.”

Another favorite: The Royal Arch Cascade near the formerly named Ahwahnee Hotel. “They’re just streams, really, that highlight the glacial polish,” he said. “But to me, they say spring.”