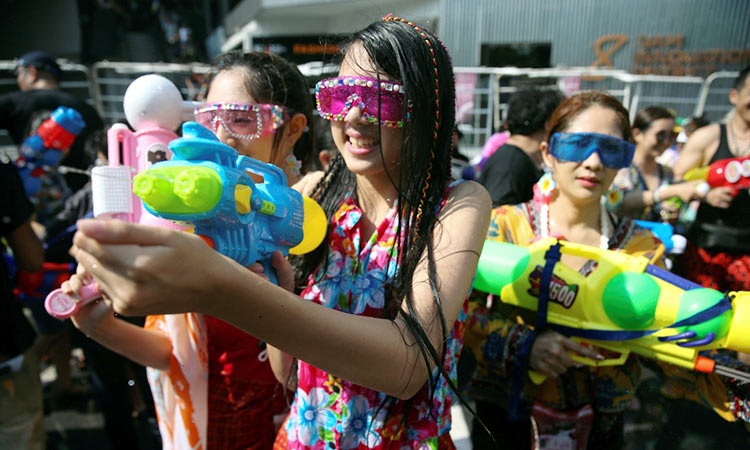 Paying respects to elders and sprinkling water over figures of Buddha at local temples are some of the traditions of the three-day new year celebration — known as Songkran — but the holiday also has a rowdier side involving alcohol-fuelled revellery among its youth.

Thais and foreigners sporting floral shirts arm themselves with colourful water pistols and protective goggles, engaging in water fights that bring entire streets to a standstill.

Authorities had issued warnings beforehand on modesty, saying that nudity and provocative clothing will be prohibited. 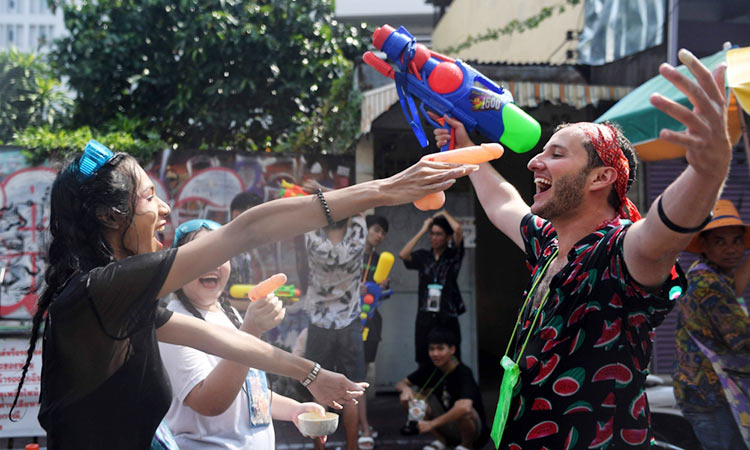 Revellers use toy water guns to spray water at each other in Bangkok on Saturday.  Lillian / AFP

There are no such restrictions however on summary drenchings.

And in Ayutthaya, elephants painted in colourful floral designs lift their trunks and spray water on delighted tourists, with the town's ancient temples serving as a backdrop.

As the sun sets, tens of thousands of ravers from across Asia are expected to dance into on Saturday night under massive water cannons and spectacular pyrotechnics, as Bangkok's S2O Songkran festival gets underway.

Some of the world's best known — and paid — DJs, including Tiesto, Steve Aoki and UK veteran Fatboy Slim are performing across the three-day dance music event — Asia's largest.

Neighbouring Laos and Myanmar celebrate the same festival with young and old throwing buckets of water over each other as music thuds from loudspeakers.

A boy plays with a water gun in Bangkok on Saturday. Lillian / AFP

Revellers get splashed with water on Khaosan Road in Bangkok on Saturday. Lillian / AFP

A girl throws a bucket of water during the annual Songkran in Bangkok on Saturday. Lillian / AFP

A boy sprays water at a couple riding past his neighbourhood in Bangkok on Saturday. Jewel Sama / AFP

A boy pours water on a family riding past his neighbourhood in Bangkok on Saturday. Jewel Samad / AFP

A boy plays with a water gun in Bangkok on Saturday. Lillian / AFP

In Yangon, where the festival is known as Thingyan, children blow bubbles and play with soap suds at street foam parties, while women dressed in traditional costumes perform dances near the famed Sule Pagoda.

Songkran is also the most perilous time to travel in Thailand, and the week beginning from April 11 is dubbed "seven dangerous days" as millions of Thais make the journey back to their hometowns by bus, vans or motorbikes.

To prevent drink driving incidents, authorities have said they will levy harsh penalties on those imbibing alcohol before getting behind the wheel.

Somchai Wayrojpipat, 57, was charged with premeditated murder after causing a fatal accident under the influence late Thursday night in the outskirts of Bangkok, police officer Pitak Poolputtha told AFP.

"This is the first case in this country where the drunk driver faced premeditated murder and the highest punishment is the death sentence," Pitak said.

The Interior Ministry has recorded more than 100 deaths in the first two days preceding the festival, but that number is expected to climb.