The game of chess builds bridges in South Sudan - GulfToday

The game of chess builds bridges in South Sudan 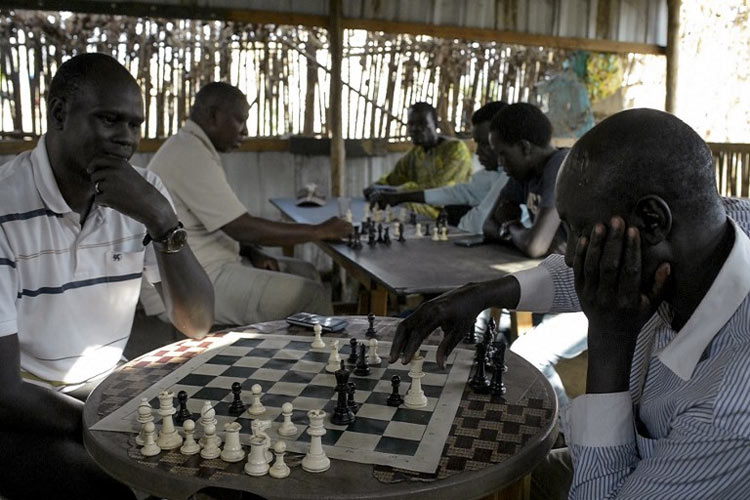 The scorching sun is finally beginning to dip on a late Saturday afternoon in Juba, where a small group gathers to watch a tense battle between two of their best men.

Deng Costa, a wiry, soft-spoken 28-year-old, stares at the chessboard in angst as smooth-talking Angelo Legge, 36, with a faux gold watch and mischievous glint in his eye, counters his Sicilian Defence at every move.

Next to the small courtyard where they are facing off, a deafening roar from young men crammed into a wooden structure watching a Premier League football match briefly breaks their concentration.

But this is not enough to help Costa.

Legge – who says some call him "Angelo the Great" –traps him in checkmate. Costa walks off in a huff.

"When I feel traumatised about my plans as an engineer... I go to chess, I find solutions.

Nevertheless, after more than five years of war, pitting different ethnic groups in the fledgling nation against one other, the Munuki Chess Club is a haven of peaceful coexistence.

It is a typical weekend at the chess club, one of several in war-torn South Sudan, where a growing enthusiasm for the game saw the nation last year secure its first ever gold medal in an international competition since gaining independence in 2011.

Legge was introduced to club chess during his civil engineering studies in Khartoum during the south's war for independence from Sudan.

In South Sudan's first ever chess tournament in 2014, he came third.

For the young man struggling to forge a life in a country where war has left millions like him in limbo, chess is a panacea.

"When I feel traumatised about my plans as an engineer... I go to chess, I find solutions," he said.

"It's a matter of passing time but also to refresh my mind and give me the vision of what will be my next move in life."

"As you can see, most of the different ethnicities, different tribes, are here playing chess, we become a brotherhood and we establish respect between ourselves," Legge said.

His opponent Costa, who learned to play as a teenager, is a student of Applied Sciences at the University of Juba and dreams of making it to the Chess Olympiad one day.

"I think sports really brings people together... and South Sudan really needs people to know each other. Not through the tribal lens or ethnic lens, but through capacities, capabilities, hobbies and mutual interests.

"Chess brings people together and that is why I love it. If things go well, chess will be... the second most popular game in South Sudan after football."

It became a fully-fledged member of the World Chess Federation (FIDE) in 2016 in Baku, Azerbaijan, which hosted the first Olympiad attended by the country's players.

The South Sudanese came second in their group, but two years later they came first, beating 45 other countries.

"That was the first gold medal for South Sudan in any sport," said Modi.

FIDE ranks South Sudan 126th out of 185 countries. The top-ranking African nation is Egypt at number 47.

Modi says that the popularity of the game is hard to pinpoint.

"During the liberation struggle, when officers and soldiers were not fighting, they would be playing chess, a lot of our senior government officials do play chess."

Modi is proud of the cohesion among chess players at the Munuki club, named after a district in Juba, which also sees doctors or ambassadors playing against students.

"I think sports really brings people together... and South Sudan really needs people to know each other. Not through the tribal lens or ethnic lens, but through capacities, capabilities, hobbies and mutual interests," Modi added.

The chess association president dreams of a day when South Sudan has a dedicated space – free of rowdy football fans – to play chess in peace and quiet, and programmes introducing the game in schools, especially to girls.

And, who knows, he adds, maybe it will also have a "number of grandmasters" – the highest title a chess player can attain.

"The challenge we face is in order to rise up in the ranks, you need to have your players playing competitively... and financially most of our players cannot afford it," Modi said.

Juba was rocked by violent bloodshed when war broke out between supporters of President Salva Kiir and his former vice-president Riek Machar in December 2013, and again in July 2016 when a peace deal collapsed.

The last agreement to end the war was signed in September 2018, and fighting has largely stopped in much of the country, with residents of Juba remarking on the absence of evening gunfire.

For young people like Legge, peace makes a stable future a real possibility.