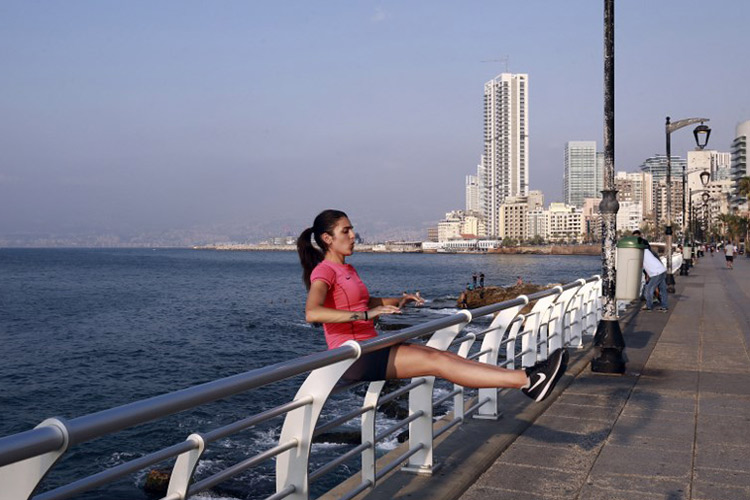 A Lebanese girl warms up ahead of running along the seafront in Beirut. AFP

LONDON: Doing short bursts of high intensity exercise can be more effective for weight loss than moderate workouts, a recent study has found.

The health benefits of interval training have been investigated on multiple occasions in the past, with previous research concluding that it can help speed up your metabolism.

Interval training consists of short bursts of intense exercise following by brief periods of rest. This can be done while running, swimming, cycling or doing another form of cardiovascular exercise.

Despite the known benefits of interval training, some may still be under the guise that in order to lose weight, exercising for longer periods of time is a better way of going about it.

Researchers from the Federal University of Goiás, Brazil, carried out a study to explore whether or not interval training is a preferable form of exercise when attempting to shed a few pounds.

The team analysed data from more than 36 studies for their investigation, which was published in the British Journal of Sports Medicine. They assessed 576 men and 522 women in total.

All of the participants of the study were different levels of fitness, with ages ranging from 10 to 70 years old.

They had all exercised for at least four weeks in the respective studies, some doing interval training and others doing longer, moderate workouts for around 30 to 45 minutes at a time.

By analysing the data, the scientists noted that all the participants had lost weight from working out, whether they had been regularly doing interval training or moderate exercise.

However, those who did HIIT training (high intensity interval training) had a 28.5 per cent greater reduction of weight.

However, the team noted that interval training may not be an ideal form of exercise for everyone.

"It is important to be aware of the possible risks and caveats associated with higher intensity training," they said.

"For example, it might increase the risk of injury and impose higher cardiovascular stress. Adherence should also be examined as higher intensity protocols can result in higher discomfort."

According to the study's findings, sprint interval training was the most effective form of exercise for weight loss.

It was noted as being even more effective when combined with regular moderate exercise.

The NHS recommends that adults do two different types of exercise every week - one aerobics-based, the other strength-based.

For adults aged between 19 and 64, it's recommended that they to do at least 150 minutes of moderate aerobic activity, such as cycling or walking, every week, in addition to strength exercises on at least two days of the week.

Alternatively, it's also suggested that adults do 75 minutes of vigorous aerobic activity, such as running or tennis, every week, with two days of strength workouts interspersed.