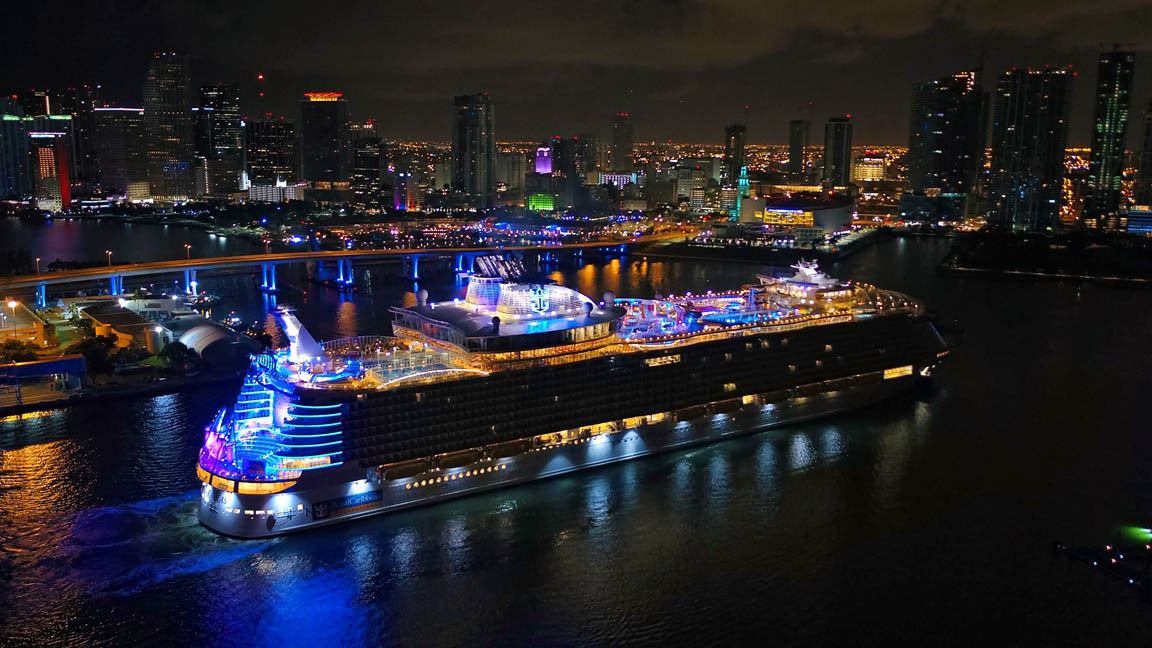 There's a moment in the original stage production on board the world's largest cruise ship that will make viewers question the reality of what they're seeing.

It involved the International Space Station, and it's part of the show "Flight: Dare to Dream." Rolling out onto the stage is a prop with what looks to be an astronaut floating in zero-g.

It looks like a television projection, something acted out beforehand, filmed and displayed on a giant, round TV screen for the audience. But it's real, featuring an intricate performance by an actor using aerialist techniques to simulate floating in space. It's one of the show's many moments that had the crowd gushing afterward, with many mistaking the live action for something recorded.

To get the look and feel of the ISS and how astronauts move in space, Royal Caribbean turned to former astronaut Clayton Anderson. Royal Caribbean Symphony of the Seas is the fourth Oasis-class vessel, which debuted spring 2018 becoming the world's largest cruise ship, first sailing in Europe and then migrating to Miami in November 2018.

"I saw this in November in Miami in the studio, with none of the video, none of the props, none of the sets, just the actors," Anderson said after viewing the full show for the first time. "It's a tribute to their performing capability that I cried then simply because when they did the song "Home," and I knew about the space station. It was so emotional to me, because it is home for me."

The show's timeline actually starts in the future, on a space colony, and then progresses backward in time including the scenes featuring the space station and Neil Armstrong's first steps on the moon. It also features a sobering in memorium presentation that pays homage to pioneers in space who have died including the Apollo 1 astronauts and crews of Space Shuttle Challenger and Columbia.

Anderson was the family escort for the ill-fated STS-107, that saw the deaths of seven astronauts as Columbia disintegrated upon re-entry. "That was tough," Anderson said. "It's not easy, doing what we've done."

The show ends at the beginning, a retelling the story of Orville and Wilbur Wright's first flight on Dec. 17, 1903 in Kitty Hawk, N.C. with a climactic scene that had the audience cheering.

Nick Weir, senior vice president of entertainment for Royal Caribbean International, said he knew the show was hitting on the right marks with the input of people like Anderson.

"Sometimes, it's a bit pompous, you try to make people feel something, and often times you fall short, but you know the objective obviously with something as magnificent as our reaching for the stars," Weir said. "It starts with sky, well it starts with a jump, then you get up to the sky, and then you go out to the stars, and that's where we'll all end up one day, so I feel like it's a nice tribute to that."

"Flight" is one of several entertainment options on Symphony of the Seas, that began sailing from Port Miami in November on seven-night Caribbean voyages. It shares the stage with a version of Broadway's "Hairspray," while cruisers can also take in an original ice-skating show titled "1977" that features a cameo from synchronized drones as well as the diving-and-aerialist show "HiRo" on the ship's AquaTheater.

The ship is nearly identical to its sister ship Harmony of the Seas, with features like the 10-story Ultimate Abyss dry slide, Perfect Storm water park and ship layout featuring seven distinct neighborhoods. What sets Symphony of the Seas apart, though, is its original entertainment including "Flight." "I'm very proud to be a very, very small part of what I consider an incredible experience." Anderson said.