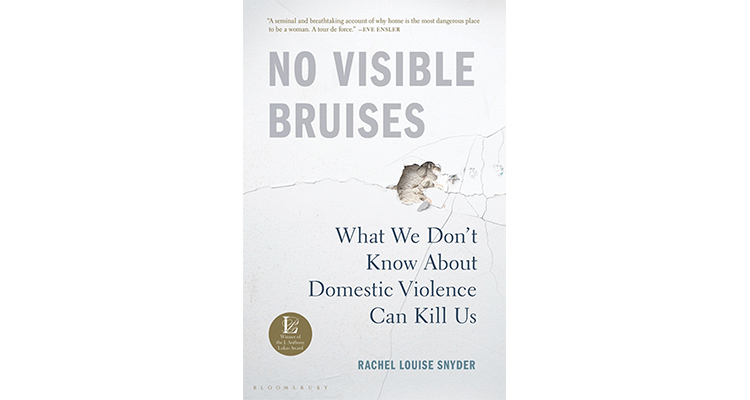 "No Visible Bruises: What We Don't Know About Domestic Violence Can Kill Us" by Rachel Louise Snyder. TNS

Rachel Louise Snyder’s latest book should be required reading for lawmakers across the country as Congress debates expanding gun restrictions for domestic violence offenders in the latest Violence Against Women Act renewal.

Snyder, who writes for the New Yorker, has been immersed in the dark and devastating world of domestic violence for nearly a decade — spending years interviewing and spending time with families of slain women and children, as well as survivors and offenders alike, and learning from the advocates and cops who are working to disrupt the system from within and save lives.

In “No Visible Bruises: What We Don’t Know About Domestic Violence Can Kill Us,” which garnered a J. Anthony Lukas work-in-progress award in 2018, Snyder exposes domestic violence’s many myths — such as, if things are really bad, the victim will leave, that shelters are enough or that it’s a private matter. She makes a powerful case for a national call to action as she shows the ways cops and advocates can make a difference if they see a domestic violence incident for what it so often is — the warning sign of a future homicide or familicide.

Her goal in the book, she writes, was “to shine a flashlight in the darkest corners, to show what domestic violence looks like from the inside out.”

In doing so, she also traces domestic violence’s wider context in America, detailing how it connects to mass shootings, misogyny and toxic masculinity.

Throughout, Snyder manages to convey just how difficult it has been for her to do this reporting (she took an entire year off “from anything having to do with violence” at one point) while keeping the book’s focus fixed on those who can’t step away from this world.

The book is far from a collection of grim statistics, even though it’s packed with upsetting information. Snyder is a talented storyteller, and “No Visible Bruises” is largely a series of moving and fascinating in-depth profiles — of people such as an effective and devoted cop in Cleveland’s Homicide Reduction Unit whose family past informs her work with domestic violence victims; a past offender and former pimp in Oakland, Calif., who now runs a program for men like him; and, most chillingly, a man imprisoned for killing his wife and daughter.

The book’s most gripping chapters detail the story of a Montana woman named Michelle Mosure, who was shot to death, along with her two kids, by her husband, Rocky. Mosure had tried to leave and press charges but changed her mind when Rocky was released on bail, seeming to be “more powerful than the system.”

And her staying, to anyone trained enough to see the context, looked a lot less like staying and a lot more like someone tiptoeing her way toward freedom.”

One of Snyder’s greatest accomplishments in “No Visible Bruises” is also what kept me reading — she carefully reveals the ways that the deaths of women such as Mosure affected their communities and beyond, leading to very real, concrete changes in how advocates and cops work together, saving lives. There’s hope here, amid all the heartbreak.