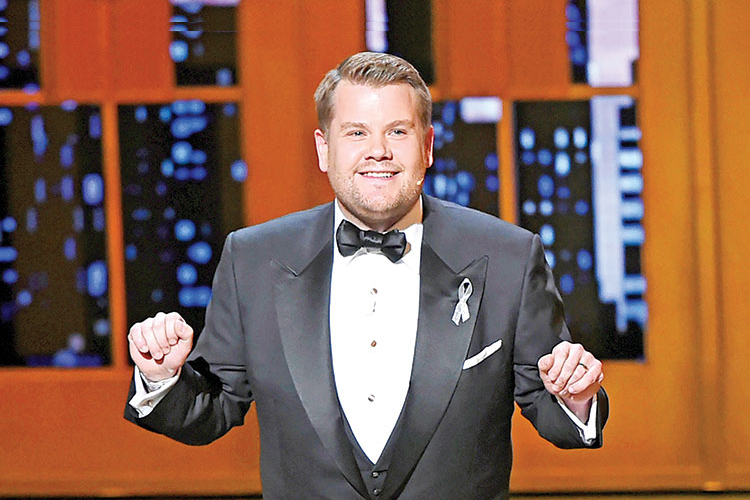 Los Angeles: TV host and actor James Corden has been tapped to once again host the Tony Awards. “The Late Late Show” host previously emceed the annual theatre awards show in 2016, and won the Tony for best actor in a play for his performance in “One Man, Two Guvnors” in 2012, reports variety.com.

Corden said: “I am thrilled to be returning to host the Tony Awards. The Broadway community is very dear to my heart, and I am beyond proud to be part of this incredibly special night.”

He opened the 2016 show with a heartfelt tribute to the victims of the Pulse Nightclub shooting in Orlando, which left 50 people dead the same day the show aired.

“Your tragedy is our tragedy. Theatre is a place where every race, creed and gender is equal, is embraced, and is loved. Hate will never win. Together, we have to make sure of that. Tonight’s show stands as a symbol and celebration of that principle,” Corden said.

The awards show will be broadcast live on CBS from Radio City Music Hall in New York City on June 9 and nominations for the 2019 Tony Awards will be announced on April 30.

The Tony Awards, which honour theatre professionals for distinguished achievement on Broadway, has been broadcast on CBS since 1978.

“We are excited to have the one and only James Corden return to host his second Tony Awards,” said Jack Sussman, Executive Vice President of Specials, Music and Live Events at CBS.

Sussman added: “James is the ultimate master of ceremonies to lead a night of live event television, celebrating live theatre. He is an incredibly charming host, brilliant performer and fearless on stage — with James, anything can happen, and probably will.”

The 2019 ceremony will mark the 73rd anniversary of the Tony Awards, which were first held on April 6, 1947 at the Waldorf Astoria’s Grand Ballroom. The ceremony is presented by Tony Award Productions, which is a joint venture of the Broadway League and the American Theatre Wing, which founded the Tonys.

“James is not only an incredible talent, but he is a veteran of the stage and has a true passion for Broadway,” Charlotte St. Martin, President of the Broadway League, and Heather Hitchens, President of the American Theatre Wing, said in a joint statement.

“We cannot wait to see what he has in store for us this year at the Tony Awards.” Nominations for the 2019 Tony Awards will be announced April 30. The awards will be presented on June 9 at Radio City Music Hall in New York City, airing on CBS.  James Kimberley Corden is an English actor, comedian, and television host. He hosts The Late Late Show with James Corden, a late-night television talk show on CBS.

The rules for the Tony Awards are set forth in the official document “Rules and Regulations of The American Theatre Wing’s Tony Awards”, which applies for that season only. The Tony Awards are considered the highest US theatre honor, the New York theatre industry’s equivalent to the Academy Awards (Oscars) for film, the Emmy Awards for television, and the Grammy Awards for music. It also forms the fourth spoke in the EGOT, that is, someone who has won all four awards. The Tony Awards are also considered the equivalent of the Laurence Olivier Awards in the United Kingdom and the Molière Awards in France.