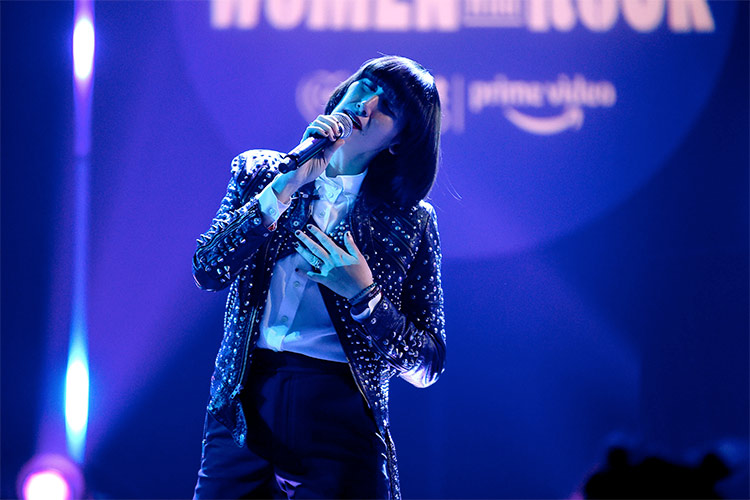 NICASIO: Karen O had to shout to be heard over her own voice.

Seated in a lounge at George Lucas’ Skywalker Sound complex, the singer best known for fronting the Yeah Yeah Yeahs was discussing her collaboration with the producer Danger Mouse, which encompasses a surprising new album, “Lux Prima,” along with what they describe as a “multisensory art installation” set to take place next month at the Marciano Art Foundation in Los Angeles.

But as she laid out their plans for the experience —  whose surround-sound mix they were here finalizing with a technical team led by Ren Klyce of “Star Wars: The Last Jedi” — the unmistakable sound of Karen O’s singing atop a bone-shaking drum beat roared up from behind the doors to a cavernous sound stage.

“Those are the subs,” she said with a grin, referring to the deep bass frequencies that evoked the stomping dinosaurs from “Jurassic Park.”

“We want you to feel your entire body vibrating.”

That the singer would schlep from LA, where she lives these days after many years as a proud New Yorker, to this facility nestled in the rolling hills of Marin County suggests the level of care that she and Danger Mouse have put into “Lux Prima.”

Released earlier, the album sets Karen O’s expressive vocals amid lush, expansive psych-rock arrangements rich with the type of texture and detail that have made Danger Mouse a valued studio partner for the likes of Beck, Adele and U2; it’s music heard ideally through high-end headphones (or through the state-of-the-art speaker rig they’ve devised for the Marciano, where listeners will be bathed in sound from all sides).

But their lofty surroundings on a recent afternoon were also an indication of how far these two have traveled from their scrappy beginnings: Karen O as the wild-eyed punk famed for drenching herself in beer and Danger Mouse as the bedroom tinkerer who risked legal trouble with “The Grey Album,” his unauthorized mash-up of Jay-Z’s “Black Album” and the Beatles’ self-titled White Album.

Now both in their early 40s, Karen O (whose last name is Orzolek) and Danger Mouse (born Brian Burton) have earned the respect and the interest of the movie business and the art world; she was even nominated for an Oscar a few years ago with “The Moon Song,” from Spike Jonze’s “Her.”

And the “Lux Prima” project, with its stately tempos and its clever echoes of spaghetti western film music, feels newly suited to that rarefied air.

Sitting next to Karen O during a break from mixing, Danger Mouse pushed back gently on the perception that he and his partner have gone Hollywood.