A rough journey to new music for Jenny Lewis - GulfToday

A rough journey to new music for Jenny Lewis 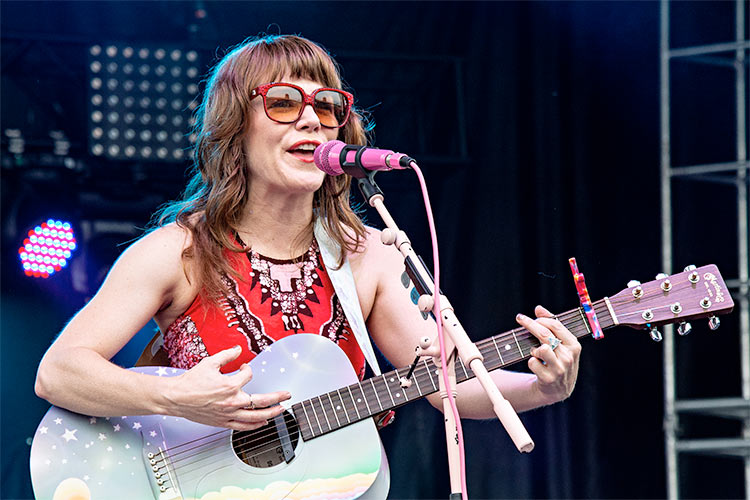 LOS ANGELES: Life hasn’t been easy for singer Jenny Lewis since the sunnier days when she performed in support of a 2014 album while wearing a rainbow-hued pantsuit and carrying a guitar with similar bright colours.

Her mother died, and a 12-year relationship ended, sending Lewis on a cross-country journey in search of herself. Finally, with a new album finished and awaiting a Friday release, she’s had to deal with the uncomfortable story of occasional collaborator Ryan Adams’ alleged mistreatment of women.

Spending much of the upcoming year on tour may seem like a relief.

The up-tempo songs “Red Bull & Hennessy” and “Heads Gonna Roll” from her “On the Line” album, with Lewis’ unerring sense of tunefulness, will get the initial attention. But the work’s emotional core emerges in quieter, more introspective material like “Dogwood,” ‘’Rabbit Hole” and “Taffy.” Those are the songs that will stick.

Much of the material was written in stolen moments on borrowed pianos, in friends’ apartments and hotel lobbies, where she had to keep quiet to avoid making a disturbance.

“I don’t think of this record as being a breakup record,” she said. “It’s more of a rebound record. It’s kind of the space in between.”

The southern California native relied on a network of friends during her post-breakup travels, staying in musician St. Vincent’s New York apartment, for example. She and two friends formed a band and wrote songs in a Manhattan storefront, where pedestrians mistook them for an art installation. She spent time in Nashville and Minnesota. Even when she returned to California, Lewis used Airbnb to explore different parts of Los Angeles.

“I ran away,” the 43-year-old said. “I really just got back here a couple of months ago. It was a three-year adventure.”

How much of an adventure? It’s hard not to notice all the references to alcohol and other substances sprinkled throughout the album’s lyrics. There’s Hennessy, of course. Grenadine. Bourbon. Beaujolais. Red wine (unspecific). Amphetamines. Paxil. A bong. Part of it is a good writer’s attention to detail, but still...

“It’s relevant,” she said. She brings a bottle to a restaurant in the heart of Hollywood where she talked about her music. Not to drink: it’s a gift for a friend, singer Nikki Lane, who’s performing later that night nearby. A former child actress who turned to music and was a member of the group Rilo Kiley before going solo, Lewis has a wide circle of friends and admirers in the business.

None of that could have prepared her for the surreal experience she had at Los Angeles’ Capitol studio while making “On the Line,” however.

Lewis played on the piano that Carole King used to make “Tapestry,” which is intimidating enough. Her band included former Tom Petty keyboard player Benmont Tench, record executive and bassist Don Was and the drum duo of Ringo Starr and Jim Keltner.

“That’s one of my favourite moments in my whole life,” she said. “Standing in the control room and watching Ringo and Jim play together, I was mesmerized. Of course I am thrilled, honoured. Shocked, really. I kept thinking, ‘Is someone doing somebody a favour here?’” She believes it was Was who called in Starr. “I don’t know exactly,” she said. “He was just there with his drums.”

Beck and Adams were two other big names who helped out. Adams, who produced Lewis’ 2014 album “Voyager,” produced some of the new music, too.

The association with Adams became noteworthy when the New York Times reported that he allegedly pursued younger female artists for physical abuse and sometimes became verbally and emotionally abusive when turned down. Adams has denied the accusations.

Lewis was not included in the Times’ story, and her interview with The Associated Press took place before the story was published. She declined a follow-up request to talk about it, and tweeted a statement: “I am deeply troubled by Ryan Adams’ alleged behaviour. Although he and I had a working professional relationship, I stand in solidarity with the women who have come forward.”

Lewis subsequently held an online album-release party that doubled as a benefit for the Los Angeles Women’s Center, and it raised more than $10,000.