My work is an expression of true nature of society: Luca Valentini - GulfToday

My work is an expression of true nature of society: Luca Valentini 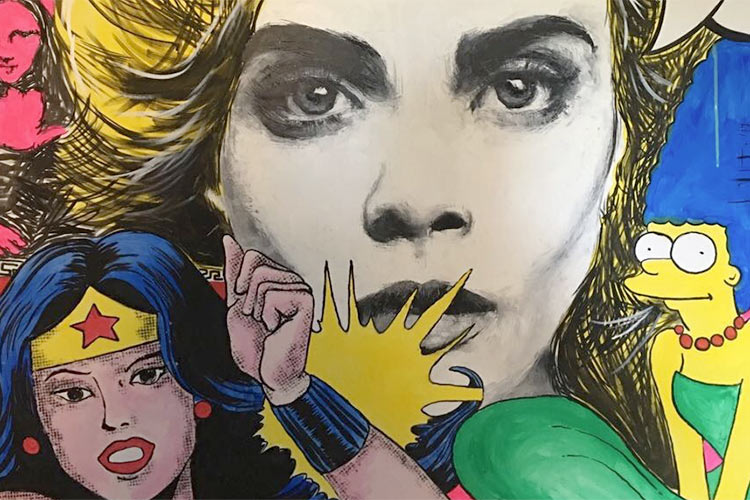 Luca Valentini’s myriad worlds have unprecedented pulling power, enticing consumers and critics alike. The fashion artist unravels his own past, aesthetic obsessions and fabulist fantasies through his artistic work of symbols and metaphors.  From Rome to Dubai, Valentini’s perspective, his universe, is indeed an inclusive one: blurring the lines between genres and gender; attracting people of all ages, and from culturally diverse places — as if that were the most obvious thing in the world.

The classicism of the cultural environment in which Valentini lives, his modern way of painting united with the contemporaneity of his subjects, and the depth of his messages make him a personality and artist that adds grist to the mill.

Endowed with superlative technical quality, Valentini appropriates and re-appropriates references to the point where, though there’s a certain familiarity to anyone looking on, the overriding sense is one of disorientation.  For the forensic fashion followers, the unravelling of Valentini›s sources and inspiration is intriguing. Others may simply revel in the layer upon layer of vaguely and recognisable elements, safe in the knowledge that there is certainly storytelling at work, but that story may be all the more engaging for remaining the mystery and magic of the metaphor.

The truth his bold portraits exude with significant use of monochrome refers to life as a perpetual state of becoming: «a future that is impossible to seize, because it is mysterious and ambiguous, suspended in the eternal contrast of its colours».

Speaking on his bold and most recent «Our Myths» collection, Valentini says the celebrities he depicts, immortalised in a series of symbols and metaphors within his work, represent «purity uncorrupted», sedimented in the reworking of famous covers of newspapers and magazines, with iconic value acutely emphasized.

“I play around with my paintings. I aim to reflect a message in a different and unconventional way. I like to create a twist on magazine covers and advertisement that expresses a certain reflection to others. To me, it’s all about addressing what can’t be seen in regular brand advertisements.

«I’m inspired by everything that I admire or catches my attention. Whether it’s fashion, music, movies or stage shows, I create a story or a meaning for every magazine cover and advertisement that I create. People generally glorify models, actors, and musicians, but to me, we are actually all the same. Composed of flesh, bones, and muscles, which is why I believe there is no need to glorify such celebrity figures,» Valentini said.

Valentini’s Action Painting is three-dimensional and the material reflects contemporary art, but it is enriched with contamination between street art and solid German expressionism; his canvas becomes «an imploded universe of suggestions and meaning». In this way, Valentini says he is able to make the space of his paintings universal and cosmic, «taming them with magnificent obsessions that intimidate, ask questions and provide answers.» He suggests his world is not conciliatory; it is an environment of strength and tension.

The synthesis of his art is not yet to come, because his pulsions talk to us about a curious artist who desires to experiment in new languages, and who allows himself to indulge in inspiration without fear or reverence.

A pop art virtuoso, expertly armed with acrylics, gold leaf and a palette knife, Italian artist Luca Valentini describes his work as an “expression of the true nature of the society in which we live today». Over the last decade, Valentini has carved out a niche in the art world through his bold representations of the fashion industry and its associated myths, artworks which intend to both disturb and fascinate the idea of perfection, and create a controversial talking point.

Born just outside of Rome, Italy, Valentini spent his formative years under the influence of an ancient city steeped in centuries of rich history, and home to a visual feast of some of the world›s most recognisable art from the Renaissance and Baroque periods.

While studying Environmental Engineering at La Sapienza Roma, one of the oldest Universities in the city, Valentini dabbled in various art courses which he says piqued an intuitive compulsion to delve further into the uncharted and liberating creative territory it presented.  Yet upon making his fervent sense of artistic curiosity know to his professor, Valentini says he was met with a «defeating» response which dismissed art as a «fundless career», inadequate for supporting a living. Unconvinced yet discouraged, Valentini pushed his passion for art to the back of his mind and moved ahead in the pursuit of an academic education, knowing that one day, the tide would change.