Barefoot boy now stands tall as a businessman and author 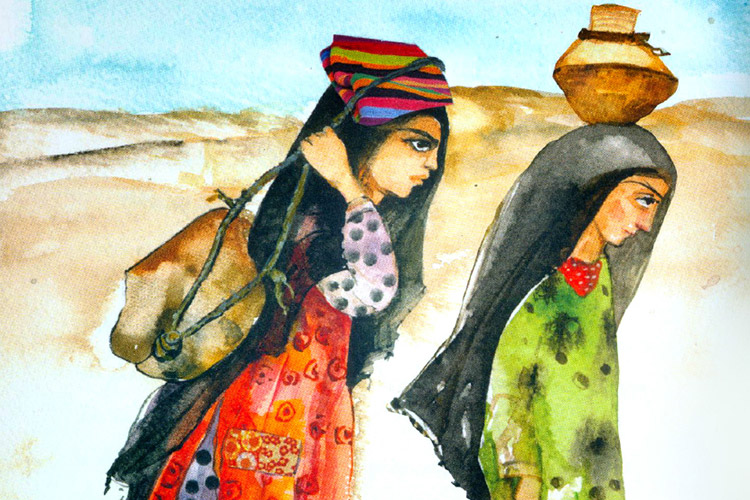 This was how water was carried in the old days.

Mohammed Abdul Jalil Al Fahim, Supervisory Board Member of Al Fahim Group and Chairman of Al Fahim Family Council, has authored a book titled “Through the Eyes of a Child – Abu Dhabi before I was born and during my childhood”. It is an illustrated memory of his life as a youngster, lived in Abu Dhabi’s community. He is now a well-known and successful business personality.

An illustrated 340-page glossy for young readers, with concept and text by Iwona Taida Drozd and illustrations by Ufuk Kobas Smink, it is an archive of historical facts of a rags to riches country and a document of a very important era in the history of UAE as seen through the eyes of a child and his knowledge of the people and the region. It was published on the hundredth anniversary of the birth of Sheikh Zayed bin Sultan Al Nahyan in 2018.

“Through the Eyes of a Child” tells the story of three generations of a family who made Abu Dhabi their home and what life was like in Abu Dhabi before the discovery of oil.  “In Abu Dhabi”, says the author in the book, “storytelling has always been the most important method of preserving wisdom, knowledge, skills and all universal values. It has played an important part in life when the rate of illiteracy was very high.

“Through this oral tradition an entire way of life and thinking has been passed down from one generation to the next. The stories of our ancestors were told and retold around the campfire. There was no way of chronicling their history otherwise.

“People understood the profound value of memory and the preservation of tradition. Luckily, in the days when their education was so poor they excelled in memorising things. 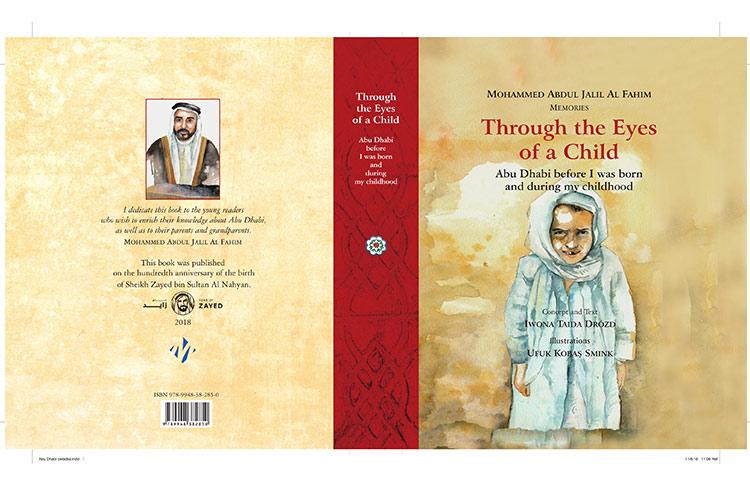 The book cover 'Through the Eyes of a Child'

“A rich oral tradition included storytelling, songs and poems which all formed valued art forms with little else in the way of entertainment or leisure. Additionally, families passed down their own personal history and their knowledge of important events through storytelling.

“I have always been fascinated by the tales my father and uncles told me when I was a child. As the stories of the people of Abu Dhabi that took place before my birth were recounted to me I also relived some of them in my imagination and developed a deep interest in the history of the Sheikhdom”.

Recently, Al Fahim was a guest speaker at Raffles International School (Secondary School), Dubai. He spoke about the book to the students.

Born in 1948 in Al Ain in the Emirate of Abu Dhabi, the author knew dreadful poverty in the years before fabulous oil wealth transformed his country forever. He grew up in the Ruler›s palace, barefoot like his friends, who are all now senior figures in positions of authority in the United Arab Emirates.

For his initial schooling, he attended the “Qur’an Religious School” and then joined the “Al Falahiya School” for further studies in 1959, before travelling to England for higher studies. Upon his return from England, crowned with a successful completion of his studies, he joined the family business in 1968 and helped in diversifying it by opening its doors to various fields such as real estate, automotive, industrial projects, travel and tourism and agriculture – in short, as many a new field as the company ventured into.

Among his numerous business achievements, Al Fahim has occupied several honourable positions that has allowed him to contribute to the development of the UAE capital city: he was a Board Member at the Telephone Company, the Council for Water and Electricity as well as Chairman of the National Investment and Securities Corporation (Niscorp) and 1st Vice President of the Abu Dhabi Chamber of Commerce and Industry. At present, he is the Chairman of Makarem General Trading and Real Estate LLC.

He has been invited to speak by a number of universities in the United States. Until 1994, he was the first Vice President of the Abu Dhabi Chamber of Commerce and Industry. He has also received the prestigious award of «Gulf Chief Executive of the Year» (1995) and Arab Business Excellence Award in 2007. He is a member of the Consultative Board to the Ministry of Health and Chairman of CBE Advisory Board of the UAE University. Another of his achievements is that he is a Board Member of Emirates Insurance Company.

His earlier work was titled “Rags to Riches – A Story of Abu Dhabi”. The book, besides being a document of the economic, social and political life of Abu Dhabi, is a vivid eyewitness account of the total transformation (within only thirty years) of a Bedouin society into a country with the world›s highest per capita income.

Al Fahim speaks with great frankness of his own life and career and provides remarkable insights into the workings of the business community and the ruling elite of the UAE.

He goes into the role of the British in his country and skilfully weaves together the story of his own successful business career with that of the development of Abu Dhabi, to which he himself has made a significant contribution.

This best seller was published in 1995 in English. More than five hundred thousand copies were sold and are still being sold. It has been translated into Arabic, French, German, Spanish, Russian, Italian, Polish, Urdu and the Malayalam languages, which are widely spoken by huge expatriate community in the UAE.

Al Fahim believes in raising awareness of the economic renaissance of Abu Dhabi through his lectures. It has also to be mentioned that he has made charitable contributions for people with special needs, by setting up two centres.

He takes care of the local heritage of Abu Dhabi through a private museum which includes a collection of documents on the history of old Abu Dhabi. He is an Advisory Board Member of the London School of Economics (LSE), UK; on the Advisory Board of the Middle East Centre; a Board of Trustee’s member of King›s Academy - Jordan and Chairman of Future Center for Special Needs and Chairman of Special Care Center for Special Needs, Abu Dhabi.