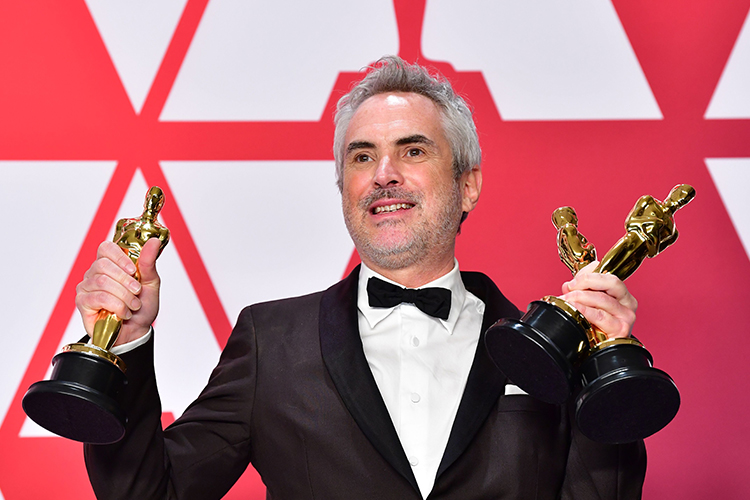 Hollywood: Alfonso Cuaron bagged a hat trick of Oscars on Sunday for "Roma," his love letter to his childhood in 1970s Mexico City, but civil rights drama "Green Book" crashed his party with a win for best picture.

The 57-year-old Mexican filmmaker won the prizes for best director, cinematography and foreign language film, capping a brilliant awards season for him -- and offering streaming giant Netflix a new feather in its cap.

Diversity, though, was perhaps the biggest winner on a night when a beloved black filmmaker won his first competitive Oscar, a superhero blockbuster set in Africa scored big, and two black actors and an Egyptian first-generation American won three of the four acting prizes.

And the wide range of films honored at Hollywood's Dolby Theatre bridged the divide between arthouse fare and popular blockbusters.

"I grew up watching foreign language films, learning so much from them, being inspired -- films like 'Citizen Kane,' 'Jaws.' And there are no waves, there's only the ocean," an emotional Cuaron said.

"I think the nominees tonight have proven that we are part of the same ocean."

Rock legends Queen, fronted by US singer Adam Lambert, opened what turned out to be one of the more enjoyable ceremonies in recent years with a mini-medley of mega-hits "We Will Rock You" and "We Are the Champions."

The British rockers may have experienced more nerves than during a normal gig: biopic "Bohemian Rhapsody" was up for several awards and ended up the biggest winner of the night with four Oscars.

The film -- which tracks the band's rise to fame from the moment when Freddie Mercury joined the band in 1970 to their legendary 1985 Live Aid performance -- took statuettes for best actor Rami Malek, as well as sound editing, sound mixing and film editing.

"We made a film about a gay man, an immigrant, who lived his life just unapologetically himself. The fact that I'm celebrating him and this story with you tonight is proof that we're longing for stories like this," said Malek, whose spell-binding turn as Mercury captivated audiences.

"Roma" was the frontrunner going into the night with 10 nominations, despite spending little time in movie theaters, in keeping with Netflix's customary release strategy.

It was expected to lose out to "Roma" for best picture, but crept up to take the honors after winning the same prize at the influential Producers Guild Awards.

"The whole story is about love. It's about loving each other, despite our differences, and finding out the truth about who we are," said director Peter Farrelly.

Another frontrunner for the 91st Academy Awards was offbeat royal romp "The Favourite," which also had 10 nominations, but turned out to be one of the night's big losers.

It went home with just one win -- albeit one of the night's biggest shocks -- for best actress Olivia Colman, who bested heavy favorite Glenn Close.

Crowd favorite "A Star is Born," too, came away with only one statuette, for Lady Gaga's song "Shallow."

"I've worked hard for a long time, and it's not about... winning," the Grammy-winning Gaga said, tears streaming down her face.

"What it's about is not giving up. If you have a dream, fight for it."

Celebrated filmmaker Spike Lee provided one of the few eyebrow-raising moments as he accepted an Oscar, his first ever competitive prize, for best adapted screenplay for race drama "BlacKkKlansman."

Dressed all in purple in tribute to late pop legend Prince, the director put the ABC network's anti-profanity bleeping machine through its paces with some colorful language.

But then he got serious with an impassioned tribute to his grandmother and a plea for voters to be "on the right side of history" in the 2020 US presidential election.

Among all the contenders, Marvel superhero movie "Black Panther" likely had the best brand recognition among the TV audience -- it took in more at the box office than its best picture rivals combined.

The 7,900-odd voting members of the Academy of Motion Picture Arts and Sciences saw fit to add gold to the blockbuster's haul of green, with statuettes for its production design, costumes and original score.

The first statuette -- for best supporting actress -- went to first-time nominee Regina King, 48, for her emotional performance as a mother defending her daughter's boyfriend, wrongfully accused of rape, in "If Beale Street Could Talk."

The Academy -- desperate to boost television ratings that have plummeted in recent years -- tried to stick to a three-hour telecast, but it hit a few bumps along the way.

There was no host for the first time in three decades, after comedian Kevin Hart bowed out amid a backlash over past tweets that were slammed as homophobic.

Controversies over the Academy's efforts to save time included plans to present a few awards during commercial breaks, and to feature only a few of the nominated songs. Both ideas were quickly scrapped.

Gaga and her co-star and director Bradley Cooper wowed the audience with their performance of "Shallow" while songstresses Jennifer Hudson and Bette Midler also performed.

In the end, the show was only about 15 minutes over time.