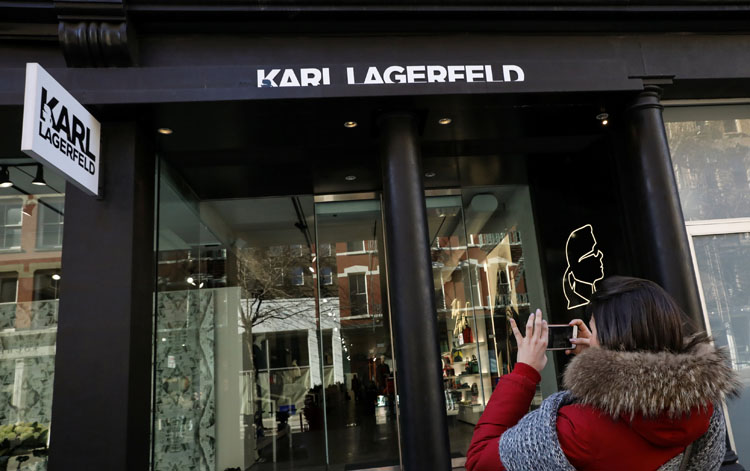 A woman photographs the Karl Lagerfeld store in New York City, US, on Tuesday. Brendan McDermid/REUTERS

NEW YORK: Late fashion icon Karl Lagerfeld earned himself a special place on the red carpet, designing clothes for a handpicked group of actresses and displaying his knack for melding the modern with the classic.

Until the early 1990s, big awards ceremonies like the Oscars were not really the stuff of designers like Lagerfeld, who died Tuesday at the age of 85, as most actresses chose to wear gowns by American designers whose names are now largely forgotten.

But with the emergence of TV shows focusing on show business and celebrities and the growth of the internet, those glitzy evenings took on an exponentially higher visibility. 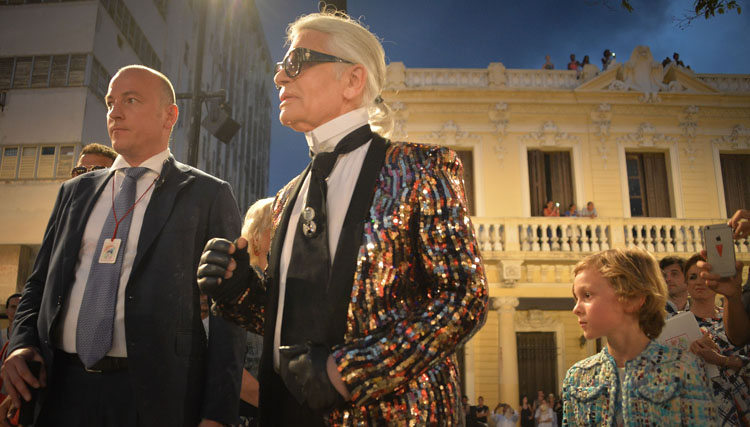 As the head of Chanel since 1983, and a collaborator at Fendi since 1965, Lagerfeld took part in this movement but on his own terms.

Lagerfeld chose a handful of actresses that he found to be inspiring, establishing special relationships with them.

Gwyneth Paltrow, Julianne Moore, Nicole Kidman and more recently Keira Knightley, Kristen Stewart and Emma Stone have walked down the red carpet more than once wearing a Chanel outfit designed by the German-born creator known for his white hair and ponytail.

These were gowns lean on color, often just black or white, with a taste for pearls, crystals or sequins and the touch that puts high fashion ready-to-wear clothes in a class of their own.

Chanel rarely created a dress specifically for a red carpet ceremony, although Lagerfeld did make a few exceptions, such as for Moore.

In 2015, she won the Oscar for best actress for her work in "Still Alice" and at the ceremony wore a gown that required four fittings and 500 hours of work.

Chanel does not pay

At about the same time Lagerfeld told The New York Times that Moore matched his idea of the perfect woman, not just because of her looks but also for "the way she is in life."

"We felt that it would be nice to be loyal," Moore's stylist Leslie Fremar told the website Business of Fashion at the time. "It's nice to choose a brand that will support you, that has nothing to do with any monetary exchange."

Indeed, most fashion houses pay up to $250,000 for an actress to wear one of their outfits, according to the Hollywood Reporter, but not Chanel, which always refused to pay anything.

This policy made front page news in February 2017 when Lagerfeld disclosed that Meryl Streep had refused to don a gown made for her by Chanel and went with another designer who had in fact agreed to pay.

"A genius actress, but cheapness also, no?" he said.

Streep was livid and denied this account. Lagerfeld ultimately said there had been a misunderstanding.

In general Lagerfeld played the game with such Hollywood ceremonies but all this glitz was not really his cup of tea.

In an interview with Women's Wear Daily in 2013, Lagerfeld reminisced about the 1970s, praising that era as unpretentious.

"There was no red carpet, there were not 200 bodyguards with a famous person. Today, things are over-organized," he said.

"There's another problem. If you give to an actress a bold couture dress a woman had ordered, they cancel the dress in a second," he added.

"Perhaps they're afraid that their husband compares and thinks that Nicole Kidman looks better in the dress," said Lagerfeld, who was known for his acid tongue.