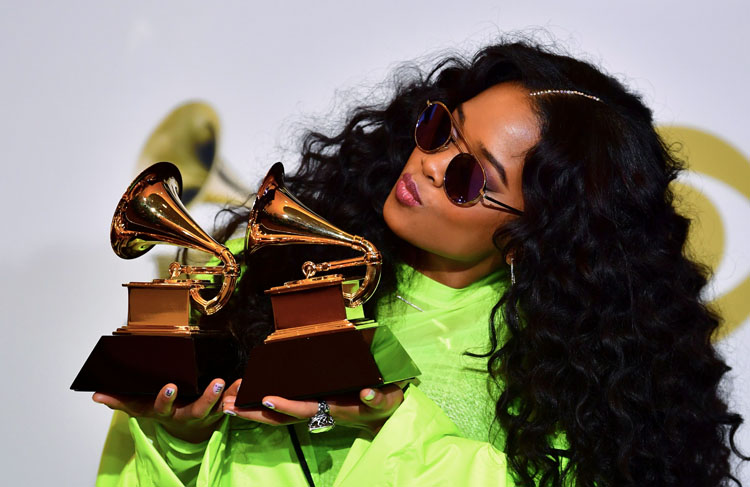 Rap artists and women have both felt shunned by the Grammy Awards in recent years. But this year, they took centre stage.

Childish Gambino's disturbing look at race relations, "This is America," won record and song of the year on Sunday's telecast. It was the first time a rap-based song won both of those awards, considered — with album of the year — the recording industry's most prestigious.

Lady Gaga and Brandi Carlile won three Grammys apiece, and former First Lady Michelle Obama was a surprise guest at the top of the show on CBS.

Childish Gambino, the stage name of actor Donald Glover, and another prominent rap nominee, Kendrick Lamar, both declined invitations to perform or attend Sunday's show. Some rap artists feel the Grammys have been slow to recognise how the genre now dominates popular music.

Ludwig Goransson, a songwriter and producer on "This is America," said backstage that he was surprised the victories were so historic. Just listening to the radio, watching the culture and seeing how many rap songs are downloaded is evidence of rap's impact.

"It's about time something like this happened with the Grammys as well," Goransson said.

Cardi B became the first solo female to win best rap album, although Lauryn Hill was the lead singer of the Fugees, which won the same award at the 1997 Grammys. Cardi B was so nervous accepting the award that she joked, "Maybe I need to start smoking weed."

She looked anything but rattled earlier, when her rendition of "Money" was among the night's performance highlights. Janelle Monae delivered a smoking version of her hit "Make Me Feel"; St. Vincent and Dua Lipa's duet on "Masseduction" was steamy; H.E.R. turned heads with "Hard Place"; and Carlile sang an inspired version of her hit "The Joke."

Being part of a big night for women was huge to her, Carlile said backstage after the show.

When she accepted her best new artist award, Dua Lipa pointedly said, "I guess this year we really stepped up."

Lipa said later she would have thanked her fans, her inspirations and team if she had more time.

When she was onstage, Lipa was one of a handful of winners who paid special tribute to fellow artists. Another was Drake, whose appearance to accept the Grammy when "God's Plan" won best rap song was a surprise because he's not big on award shows.

He reminded fans and fellow artists that awards are based on the subjective views of others, and aren't contests in which there are clear winners and losers.

"You've already won if you have people who are singing your songs word for word, if you're a hero in your hometown. Look, if there are people who have regular jobs who are coming out in the rain and the snow, spending their hard-earned money to buy tickets to come to your shows, you don't need this right here. I promise you. You already won," he said at the Staples Center in Los Angeles.

Musgrave picked up album of the year for "Golden Hour," which is labelled country but had wider appeal.

"I never dreamed that this record would be met with such love, such warmth, such positivity," said Musgraves, who performed a stately version of her song "Rainbow."

Dolly Parton starred in the best of the night's two tributes to veteran artists, performing a medley of her songs with Miley Cyrus, Katy Perry and Maren Morris. The highlight of Diana Ross' night was the cute introduction by a grandson with a mountain of hair.

The Grammys took some online blowback by having Jennifer Lopez deliver a tribute to Motown , once the nation's preeminent label for black artists. Despite her hustle, Lopez was outshone by show host Alicia Keys and Smokey Robinson delivering one verse of "Tracks of My Tears" a capella.