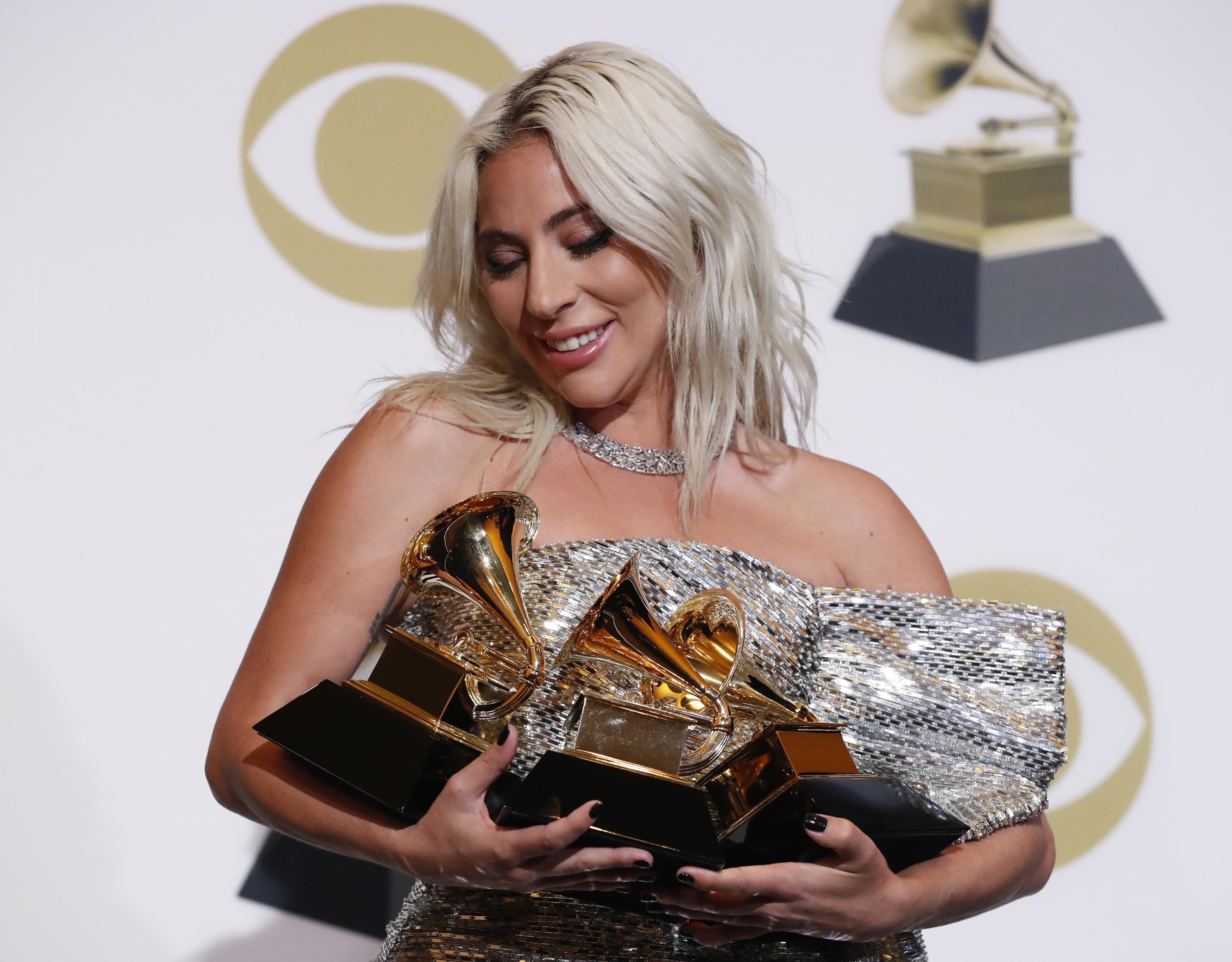 Lady Gaga poses backstage with her awards for Best Song Written for Visual Media and Best Pop Duo/Group Performance for "Shallow" and her Best Pop Solo Performance for "Joanne (Where do You Think You're Goin?).

For the second consecutive year, black hip-hop artistes dominated nominations across the board.

But unlike in years past, the artists snagged a handful of major wins — perhaps a sign that the Recording Academy is slowly getting in touch with pop culture's more groundbreaking work.

Cardi B's win for "Invasion of Privacy" was a crowning achievement for the artist, now at the top of the male-dominated hip hop world.

The 26-year-old rap queen beat out the late Mac Miller and superstar Travis Scott to claim her first career Grammy, having soared to fame on the runaway success of her smash hit "Bodak Yellow" that centres on the Bronx native's past as a stripper.

The visibly shaking star, fresh off a rousing performance of her hit "Money," delivered an emotional acceptance speech alongside her husband Offset of the rap trio Migos.

"The nerves are so bad. Maybe I need to start smoking weed," she said to laughter and applause, before turning to Offset and saying: "you husband, thank you."

Cardi B's vivacious charisma shines through on the album, in which she brashly owns her past — and her spectacular rise to the upper echelons of music.

The star born Belcalis Almanzar provided the soundtrack of the 2018 summer with her saucy hit "I Like It," which pays homage to her Latin roots by sampling a 60s-era boogaloo standard.

One of the most successful albums of 2018, the Recording Industry Association of America certified all 13 tracks on "Invasion of Privacy" as "gold" or higher — a benchmark of sales — the first female artist to do so.

Childish Gambino won the first Song and Record of the Year awards ever for a rap song, a milestone for the genre that the academy has drawn criticism for snubbing in the past.

Gambino — the rap alter ego of actor Donald Glover — was one of the night's leading stars with four wins, also scooping a Best Rap/Sung Performance award and Best Music Video for the provocative hit "This Is America."

But he wasn't at the gala to enjoy the moment.

His collaborators told journalists they did not know why he did not attend, but he had reportedly declined an invitation to perform.

"I think if you listen to the radio or if you just watch our culture, if you look at the most downloaded, streamed artists...you see what people are getting inspired by," said Ludwig Goransson, who co-wrote the hit with Gambino.

"It's about time that something like this happened with the Grammys," he told journalists after the gala. "They're getting the same kind of senses as the people."

Drake — who snagged seven nominations — won Best Rap Song for "God's Plan," his only win of the night for the inescapable smash of 2018.

The Canadian rapper — who has sparred with the Recording Academy in past years — showed up to accept the award despite rumors that he would skip the gala.

But his acceptance speech was delivered with a perceptible twinge of bitterness.

"It's like the first time in Grammys history where I actually am who I thought I was for a second, so I like that — that is really nice," he said.

Kendrick Lamar, who led the Grammy nominee field with eight nods, tied for his first win of the night for "King's Dead," which he had performed alongside Jay Rock, Future and James Blake.