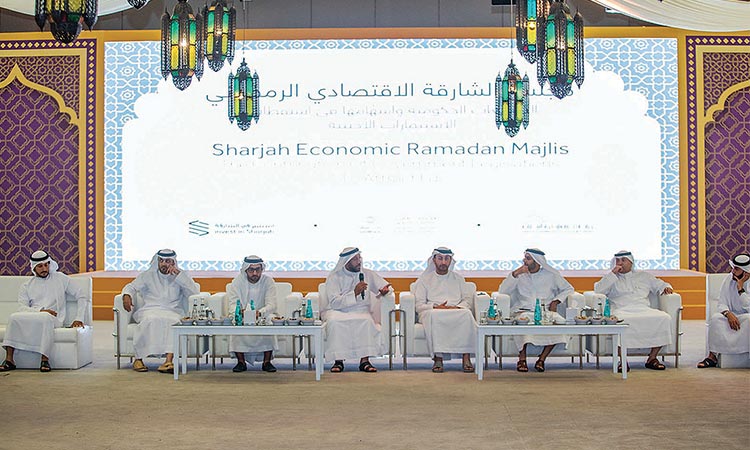 Panelists at the fifth Sharjah Economic Ramadan Majlis (SERM), held at Al Jawaher Reception and Convention Centre (JRCC) on Sunday under the theme ‘The Contributions of Government Legislations to Attract FDI’, were of the view that the UAE had an advanced and agile legislative system that kept abreast of the local and regional economic and technological changes.

During the event participants pointed out that the contemporary and up-to-date system contributed to the country’s competitiveness in attracting investments and talents that bolster the country’s position on the global investment map.

During the event that was organised by the Sharjah Investment and Development Authority (Shurooq), Sharjah Chamber of Commerce and Industry (SCCI) and the Sharjah FDI Office (Invest in Sharjah), the panelists opined the legislations were a manifestation of the wise leadership’s vision of the development of economic, investment strategies and policies to ensure the sustainability of the development process. They pointed out that the country also had a solid and strong economy and advanced infrastructure conducive to the establishment of business.

The Majlis kicked off with a report highlighting the UAE’s accomplishments on local, regional and international levels, and the strides it had taken to become a destination for FDI. According to the report, the UAE attracted more than $10 billion in FDI last year, with a forecast of reaching $20 billion in the next few years. The report also highlighted the country’s achievement in global competitiveness. According to IMD World Competitiveness Centre’s 2018 data, the UAE secured No.1 ranking in 20 indicators and achieved top positions in several others.

In his speech, Sheikh Fahim bin Sultan Al Qasimi said: “The UAE is constantly looking to secure the future of various sectors which have positioned the country on the global landscape as a destination for FDI. Those who keep tabs on the legislations and regulations in the UAE and Sharjah specifically would have noticed the influx of FDI into the country after His Highness Sheikh Khalifa bin Zayed Al Nahyan, President of UAE, had issued a Decree on Foreign Direct Investment (FDI) which aims to promote and develop the country’s investment environment.”

Abdullah Al Saleh said that countries that had been able to gradually open up their economy and attract FDI had gained experience and knowledge transfer which boosted the local economy and increased its competitiveness.

“Proper legislation is one of the most important aspects to attract FDI, as it guarantees investor and consumer rights. Additionally, a strong infrastructure provides a host of advanced services, especially free zones that offer diverse and advanced services for investors in a lot of sectors,” said the Undersecretary, noting that the UAE had nearly 40 free zones across the country.

Dr Obaid Saif Al Zaabi, commented: “The UAE is witnessing a boom in FDIs due to its legislations which allows capital flow and opens various investment opportunities. There are committees working on developing mechanisms in order to have a greater impact in attracting investors.”

He added that the Securities and Commodities Authority conformed to the highest international standards and cooperated with financial markets to develop its infrastructure.

“The Authority has also developed an investor protection and corporate governance system which will be launched next month and have a direct impact on increasing FDI flow to the country,” the CEO said.

Marwan bin Jassim Al Sarkal, Executive Chairman of Shurooq, commented: “The country is experiencing a new boom, which is evident in the economic growth of the majority of sectors in the country.”

He added that the geographic location of the country gave it an advantage that made international companies set up their regional headquarters in the UAE. “This country has become a nurturing environment for the majority of sectors, providing added value for FDI through its advanced and updated legislation, infrastructure and smart services, amongst many others, that gives investors ease of mind, thereby boosting its performance.”