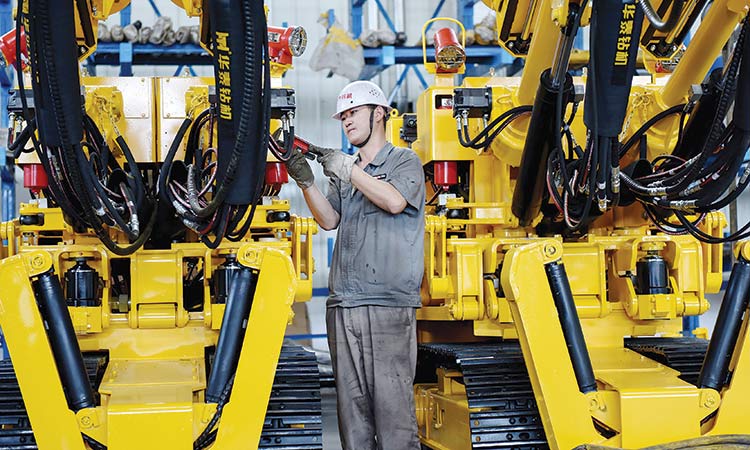 An employee at a machine tool factory in Zhangjiakou, China. Agence France-Presse

China’s producer prices flatlined in June on lower oil prices and weak global demand, fuelling concerns that a slowdown in manufacturing from a bruising trade war will further drag on growth in the world’s second-biggest economy.

The producer price index (PPI) showed no growth in June from a year earlier, the National Bureau of Statistics (NBS) said on Wednesday. That compared with a 0.6% rise in May and a gain of 0.3% forecast by economists in a Reuters poll.

The June PPI reading was the lowest since August 2016 when the index last fell year-on-year. Factory gate prices slowed from May as well, falling 0.3%.

On the other hand, June consumer price growth in annual terms matched a 15-month high seen in May as supply shortages triggered by the African fever outbreak and extreme weather conditions continued to push up meat and fruit prices.

A cooling in producer prices, seen as a gauge of industrial demand that gives momentum to investment and profits in the Chinese economy, may rekindle worries about deflation and prompt the authorities to launch more aggressive stimulus.

“The bigger picture is inflation, apart from food inflation, is actually pretty weak and with the economy continuing to cool, I think the return to factory-gate deflation is very likely,” said Julian Evans-Pritchard, senior China economist at Capital Economics.

Tommy Xie, China economist at OCBC Bank in Singapore, also said he saw the risk of produce prices contracting in annual terms as early as next month.

Upstream sectors were particularly weak, with prices for oil and natural gas extraction down 1.8% from a year earlier, the NBS data showed. Price gains in the coal mining sector also eased.

Although Beijing and Washington reached another truce in their trade war last month, economists expect continuing pressure on the Chinese economy as manufacturers shift more production abroad to avoid US tariffs on China-made goods.

Spot prices for steel rebar in June lingered below the levels of a year earlier and may worsen due to seasonal slackening of construction activity amid high temperatures and rainfall in summer.

At the same time, however, he and other top policymakers have reiterated that China will not resort to large-scale stimulus. Evans-Pritchard from Capital Economics said the government could adopt more monetary easing and off-budget fiscal support to bolster the economy.

“But I think the days of big drastic stimulus are probably over. The most we can hope for is really it (more government support) helps to dampen the headwinds and prevent the economy from slowing too sharply.”

Analysts polled by Reuters expected consumer prices to rise 2.7%, matching the pace seen in May.

Some economists said consumer inflation may accelerate due to dwindling pig stocks, but others contended price rises will cool.

“CPI may have peaked in June and could come off steadily in the second half,” said Wang Jun, Beijing-based chief economist at Zhongyuan Bank. “There are deflationary risks but the overall pressure is not big, because deflationary risk is only restricted to manufacturing products.”

Core inflation that strips out volatile food and energy prices was at 1.6% in June from a year earlier, the same annual pace as in May.

On a month-on-month basis, CPI fell 0.1% in June after no change in May.

The move came a day after the People’s Bank of China said lending and borrowing rates in short-term markets should not fall below the rate it offers on excess cash that banks park with the central bank “under normal circumstances”.

Despite its efforts to support the slowing economy by easing policy and injecting ample cash supplies into markets, the PBOC has been uneasy about the sharp drop in market yields.