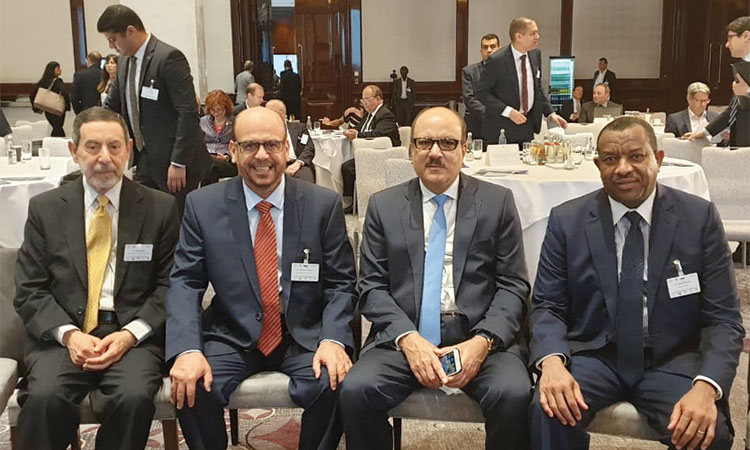 Officials of Ajman Chamber and other delegates participate in the Arab-German Economic Forum.

Business Bureau, Gulf Today
Abdullah Al Muwaiji, Chairman of the Ajman Chamber of Commerce and Industry (ACCI) along with the counterparts in the country participated in the 22nd Arab-German Economic Forum, which is held annually in Berlin.

This edition’s guest of honor was Egypt represented by Egyptian Prime Minister Mostafa Medbouli who led a delegation comprising a large number of ministers in the Egyptian government concerned with the Egyptian economic file.

The Forum praised the Egyptian government’s efforts to attract foreign investment, where the annual growth rate reached 5.5 per cent for the last fiscal year.

The 22nd edition of the Arab German Economic Forum focused on a number of topics, such as smart cities, infrastructure development, food security, and food product development as well as various logistical means, which would reduce the cost of transportation for agricultural and industrial products, thus reducing annual inflation and control.

It also tackled other matters like the education in the future, where the number of students is anticipated to significantly increase expecting that the “Online Education” would be a key provider of education in the world. In addition, the Forum discussed many other important and vital topics aimed at enhancing and beefing up the economic growth. Speaking to Forum, Abdullah Al Muwaiji, Chairman of the Ajman Chamber of Commerce and Industry called on all businessmen, particularly in the emirate of Ajman and in the UAE in general, to establish strong relations that would serve the interests of both the UAE and German sides. This is because the German products are renowned for the specifications and standards that ensure high quality level, thus its exports show high indicators, he added.